And I realized it’s both a race and a meditation.

The world, I realize, is split into two kinds of people: cyclists — goal-focused and ambitious — and bike riders — relaxed wanderers happy to let chance direct them at an unregulated speed. 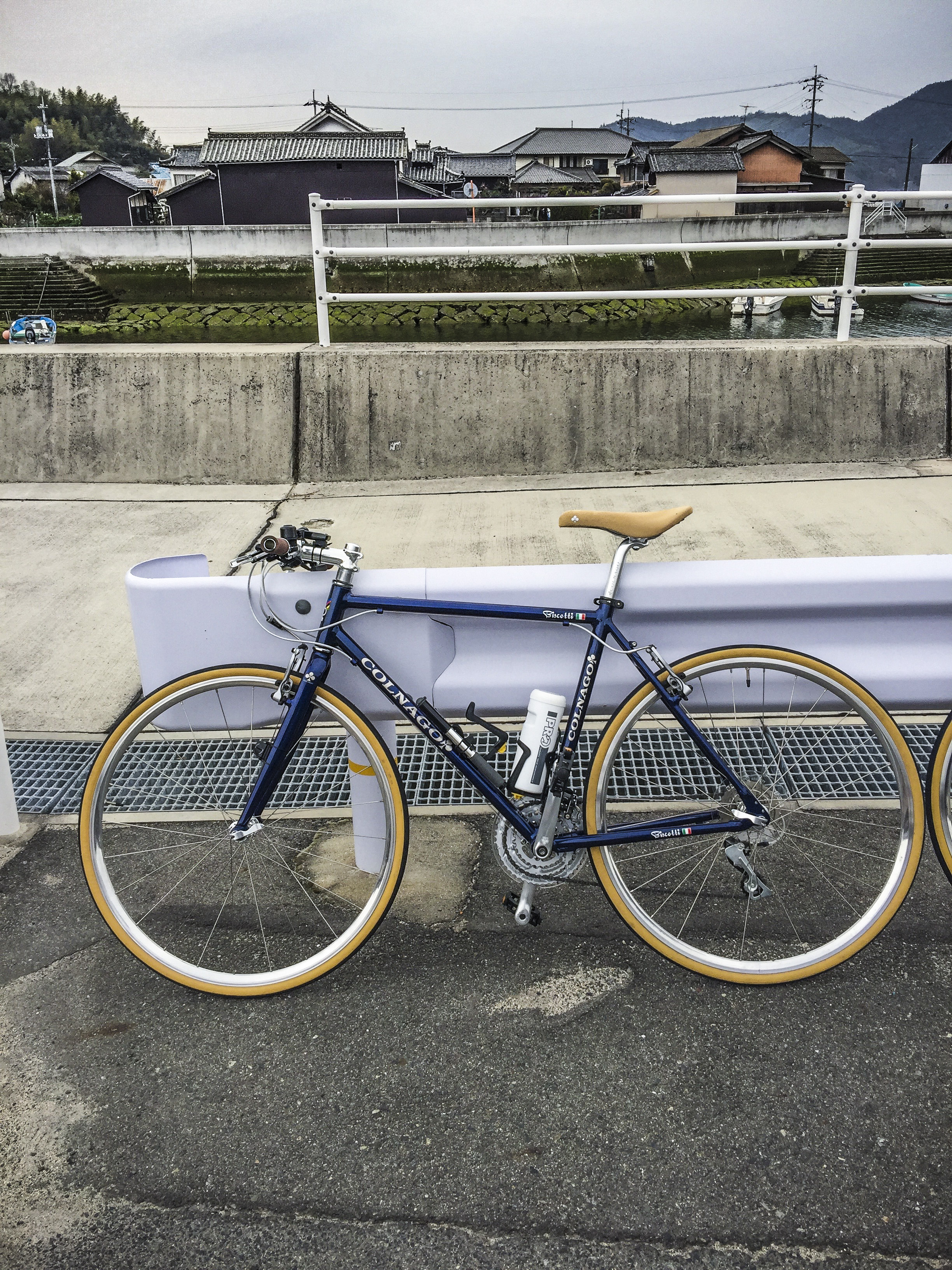 The joyrider. Photo by Erica Firpo

In theory and in practice, I am a bike rider. That my husband, Darius, is pure cyclist is a fact that I had never noticed until I am on the ferry crossing Seto Inland Sea in central Japan, staring at the saddle of my beautiful, handmade Colnago, the Ferrari of bicycles. This is our third day in Japan after 48 schizophrenic hours spent running around Tokyo at bullet-train pace, followed by a five-hour pause on an actual bullet train to Onomichi, a small port city east of Hiroshima.

We are looking for an off-road Japan. Yes, we want wooden ryokan and shrines, but we also want to experience contemporary Japan. And we want to experience precious and rare couple time — just us, a dynamic duo or a terrible twosome — clearing our heads of the worries that get tied in knots with having kids, living in Rome, paying bills, growing up, and fulfilling dreams.

Which is why we are spending the day biking the Shimanami Kaidō, an epic, 70-kilometer coastline route, also known as the Nishiseto Expressway, that links Onomichi in Hiroshima (on Japan's main island, Honshu) to Imabari on Ehime (on the island of Shikoku), crossing the six islands of the Seto Inland Sea. A dedicated bike lane skirts the expressway and unfurls like a ribbon through rustic towns and across jaw-dropping bridges. 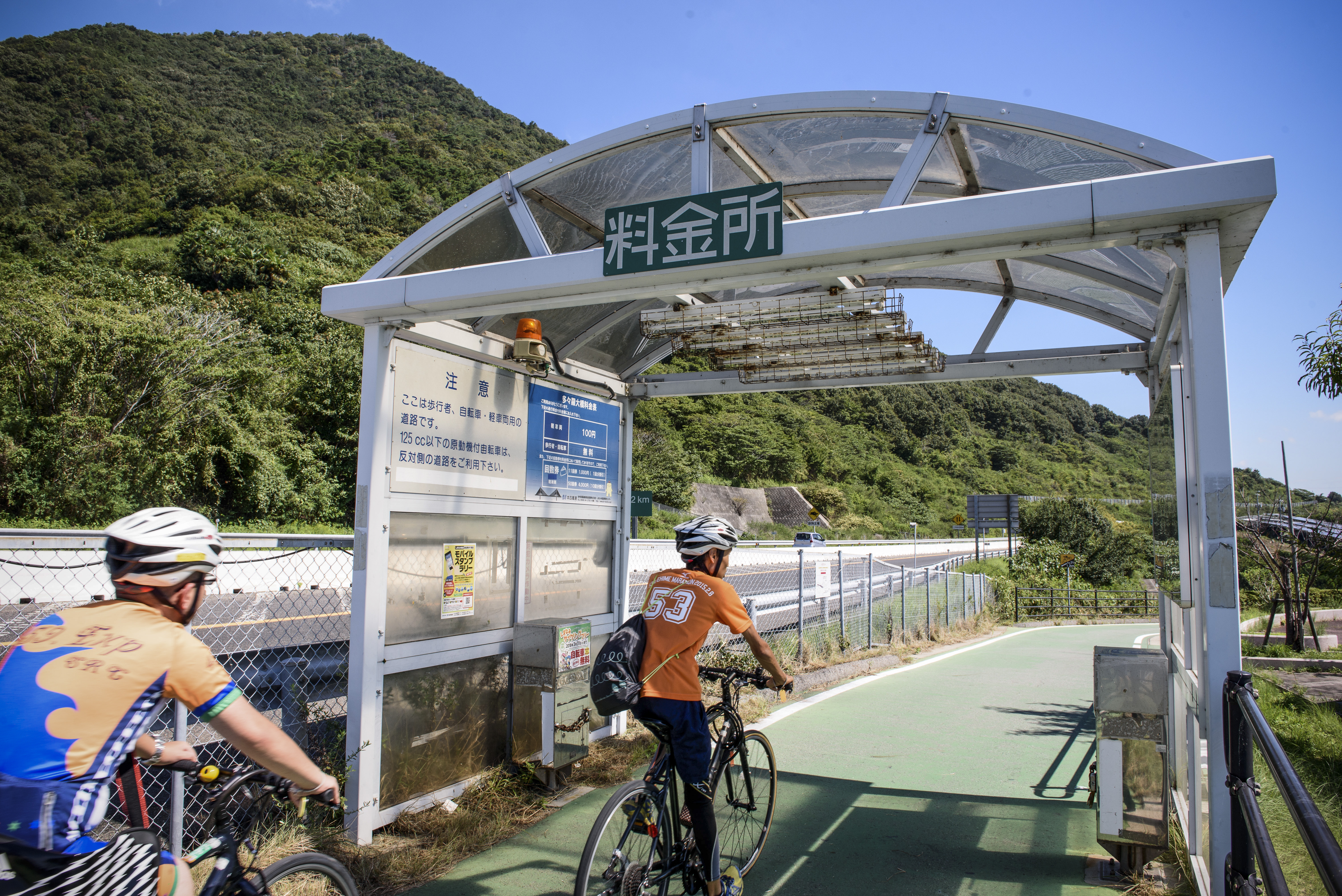 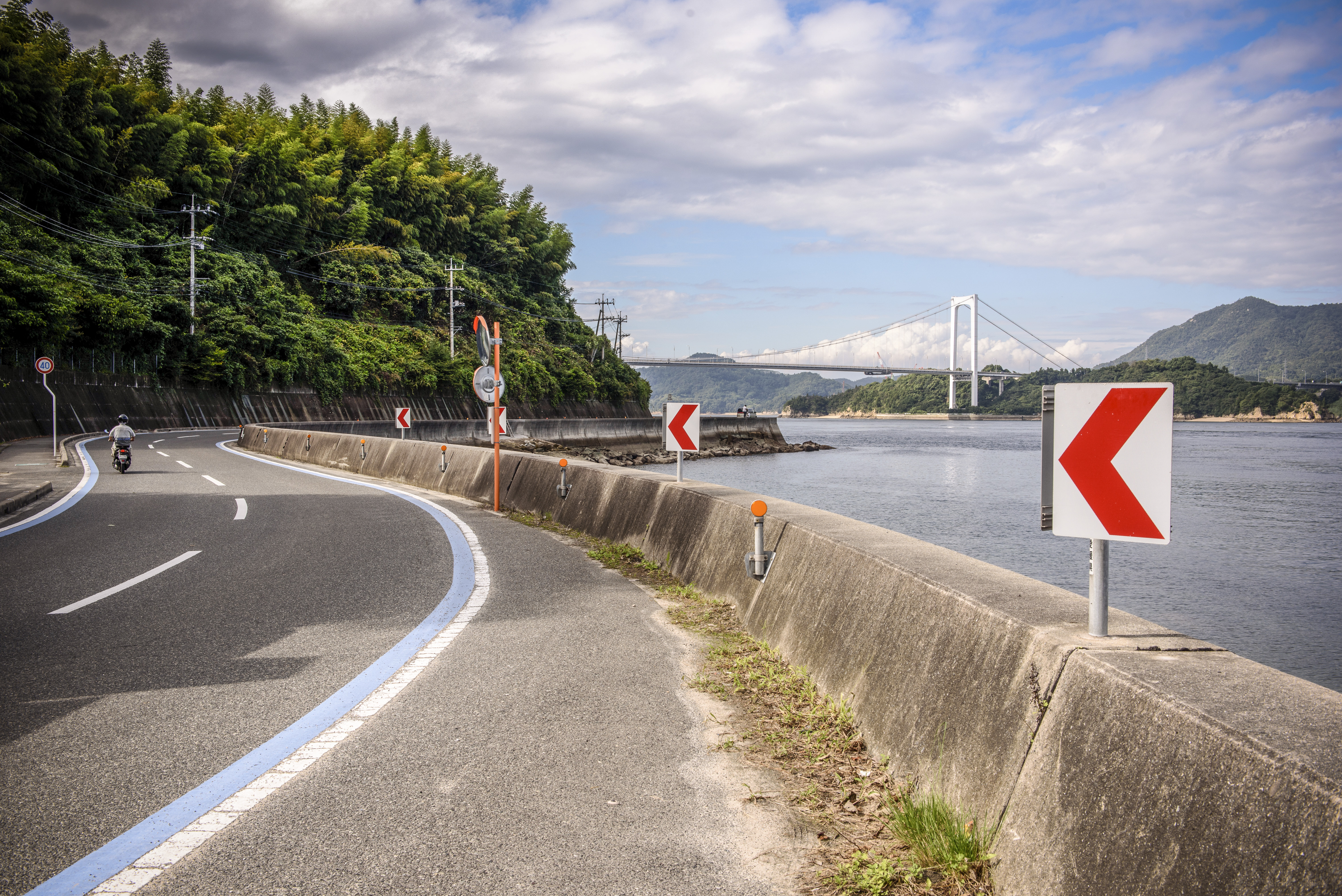 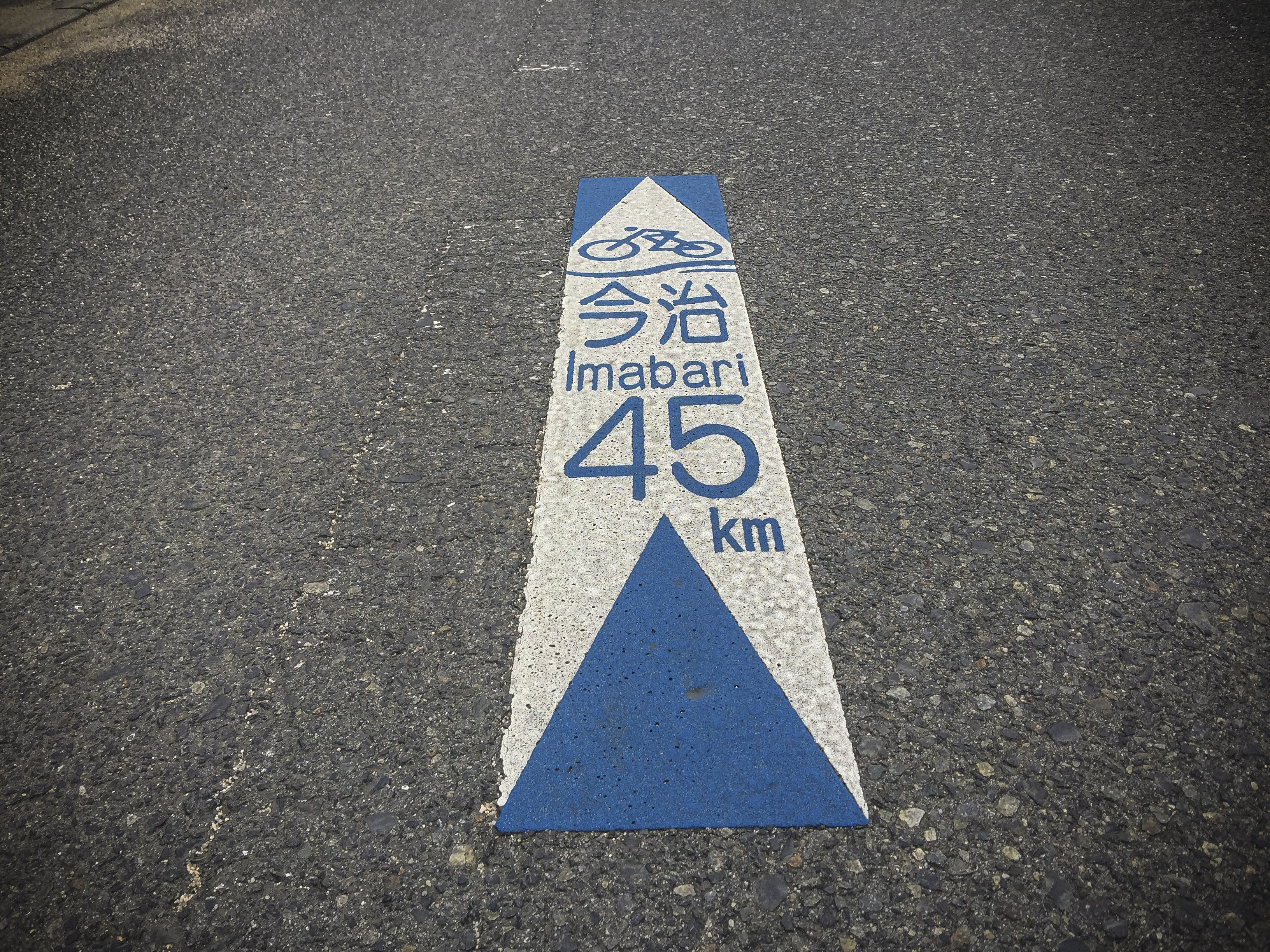 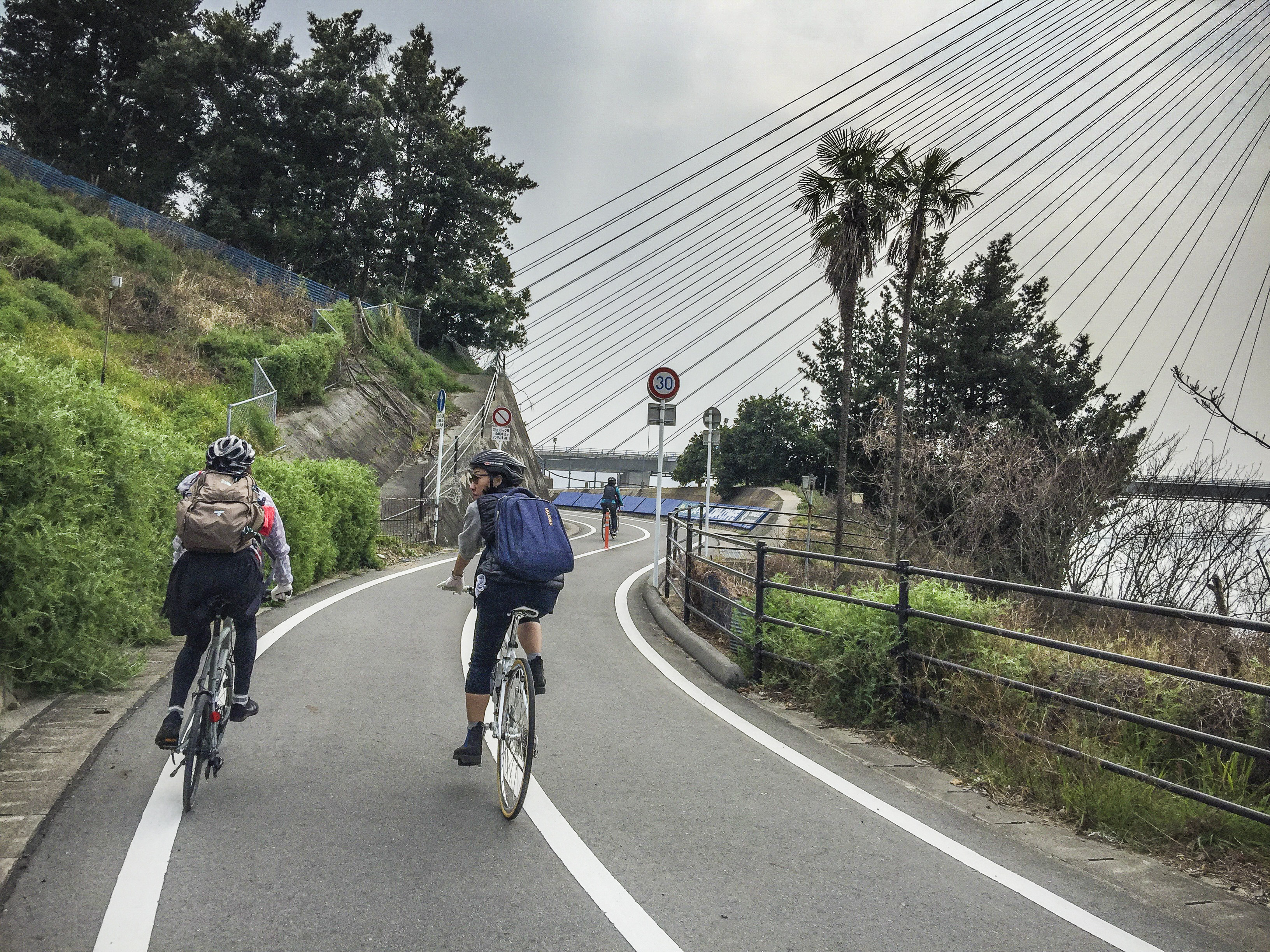 By any means of transportation, the Shimanami Kaidō is a gorgeous voyage, island-hopping through rolling green hills and mountains, sleepy towns, and misty coastlines offset by dynamic structures like Kurushima-Kaikyō, the world's longest suspension bridge. On a bicycle, the Shimanami Kaidō's meditative flats, heart-pumping cloverleaf ramps, and sublime shoreline appeal to beginners like me as well as speed racers like Darius. Which is to say that if you're not here for the photos (me), you're here to test your speed (him).

Cyclists are offered awesome paths and epic views throughout the journey.  Photo by Wu Sheng Wang

For the uninitiated, the saddle of a bike dictates the ride. And the bike I had picked up at our hotel had a racing saddle — beautiful, thin, soft leather, built for speed and dynamism. In other words, the complete opposite of the wide cruiser seat I had envisioned when Darius initially suggested the journey. His idea of fun involves whirling along the coastline, spinning our wheels, literally and figuratively, as we spend four hours crossing slick asphalt and futuristic suspension bridges, zipping through Japanese culture. This is totally out of sync with my idea of aimlessly cruising the seaside, enjoying the local eateries and stunning scenery. But it's what we're doing.

The route attracts cyclists from all over Japan, particularly for the annual Setouchi Shimanami Kaidō International event, aka Cycling Shimanami, a race up and down the highway. Onomichi has clearly embraced the cycling vibe. In 2014, the city unveiled Onomichi U2, a former maritime warehouse converted into a design, restaurant, and retail complex that includes the bike-friendly Hotel Cycle, which has racks and lockers throughout. It's the kind of place where guests never need to leave their bikes if they don't want to. We rented ours from the hotel's giant shop, which carries high-caliber lines like Colnago, the choice for purists, and Giant, the one for experimentalists. Darius spent what felt like hours checking out all the options, in the end opting for Colnagos. His decision was based on aerodynamics, mine was based on color. (I picked a gorgeous chocolate brown model.) Then we set out.

Ironically, we do the first leg of the ride on a boat, crossing from Onomichi to Ikuchijima on one of the many bike-friendly ferries that zig-zag across the inlet to the various nearby islands. The journey takes about six minutes, five of which we spend talking about toe clips, the biking shoes Darius wishes he had packed, and okonomiyaki, the savory pancake that has become our new favorite meal. We spend the last minute in awe, staring back at the Onomichi hills and the funicular making its way to the peak past shrines dotting the ascent. 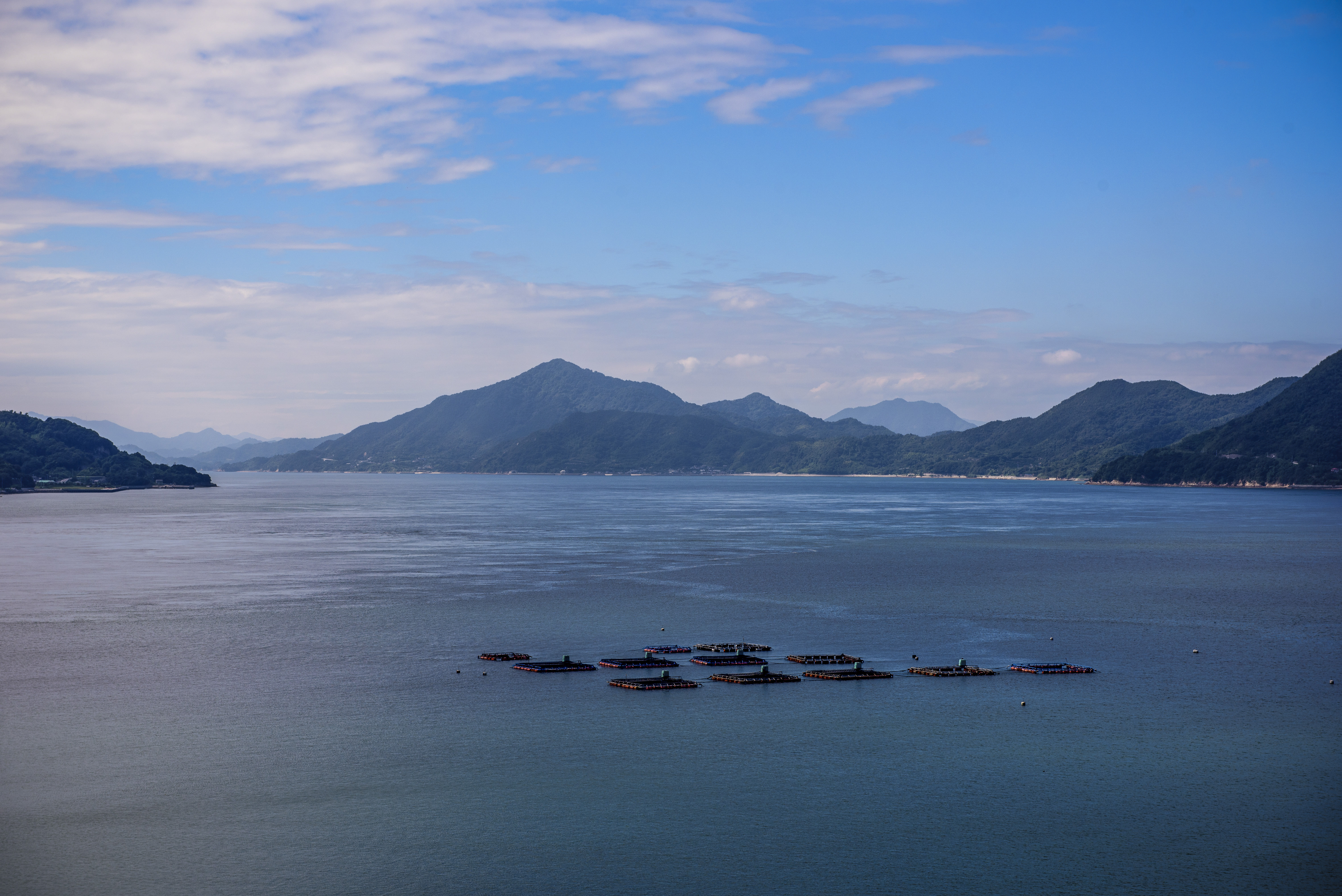 As soon as we hit the shore, Darius takes off in a blur. I am competitive, so I hop on my bike, pedaling hard to keep up and to distract myself from the uncomfortable saddle.

But the landscape itself is the distraction. As far ahead as I can see are places where I want to stop and enjoy the view. Inadvertently, I slow down, trying to take it all in. On the land side are a smattering of decades-old buildings with charming vintage signs indicating nearby shrines. I see temple towers peeking through the surrounding trees. Orchards of lemon groves surround Setoda, and I later learn that this area is Japan's largest producer of citrus. The coastline is dotted with empty beach restaurants and michi no eki, roadside stations that can be simple car stops or charming snack bars, all filled with Japanese treats. 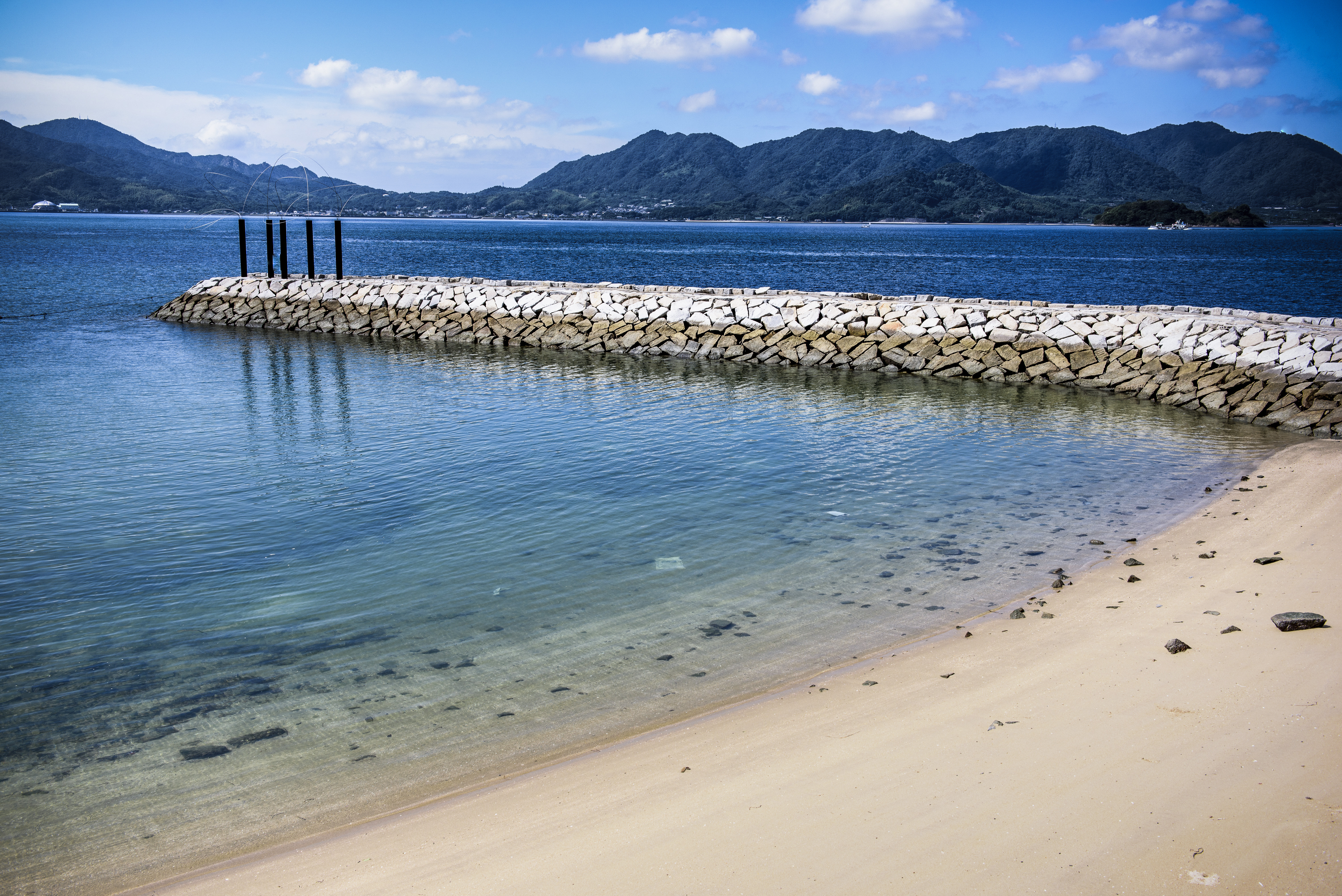 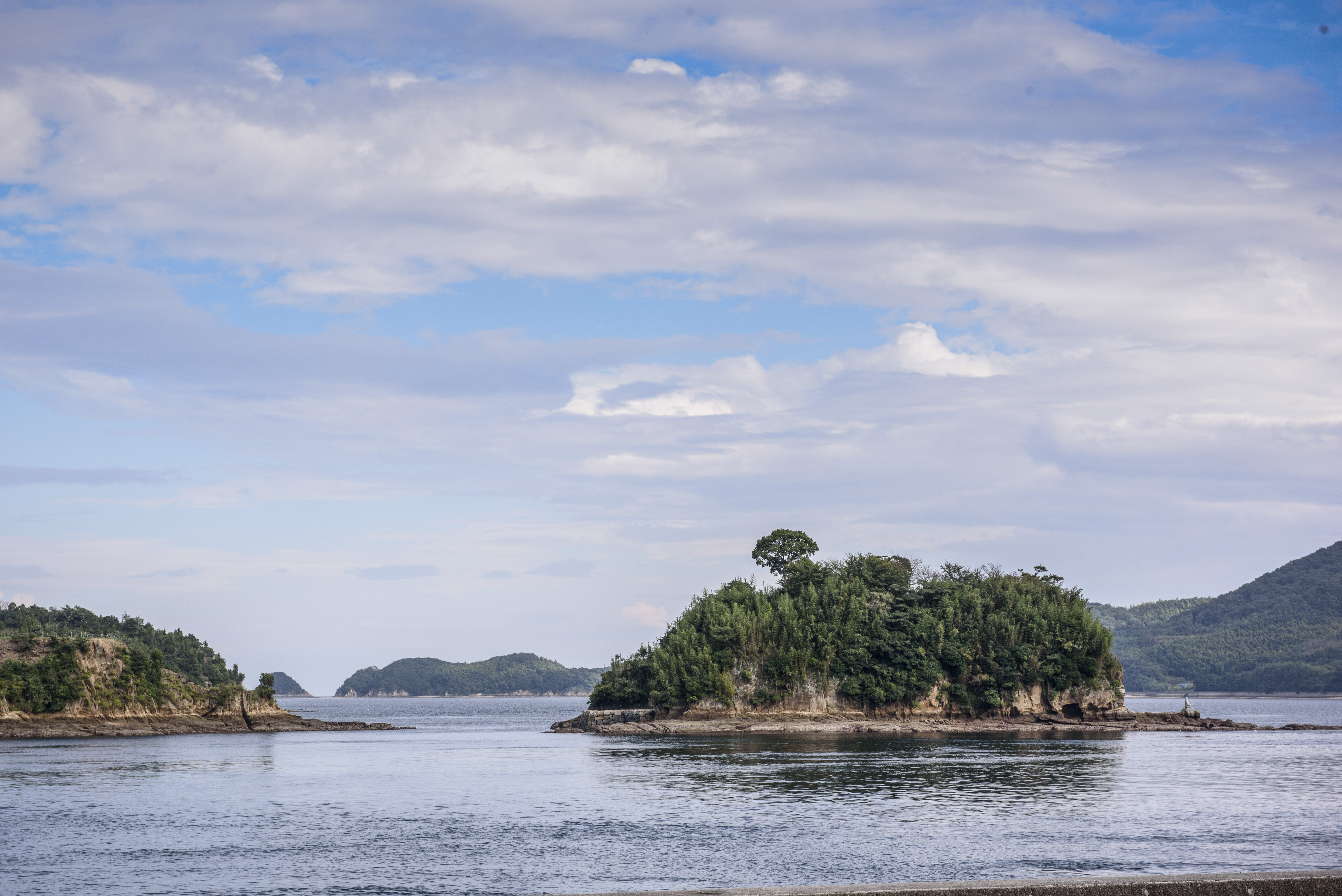 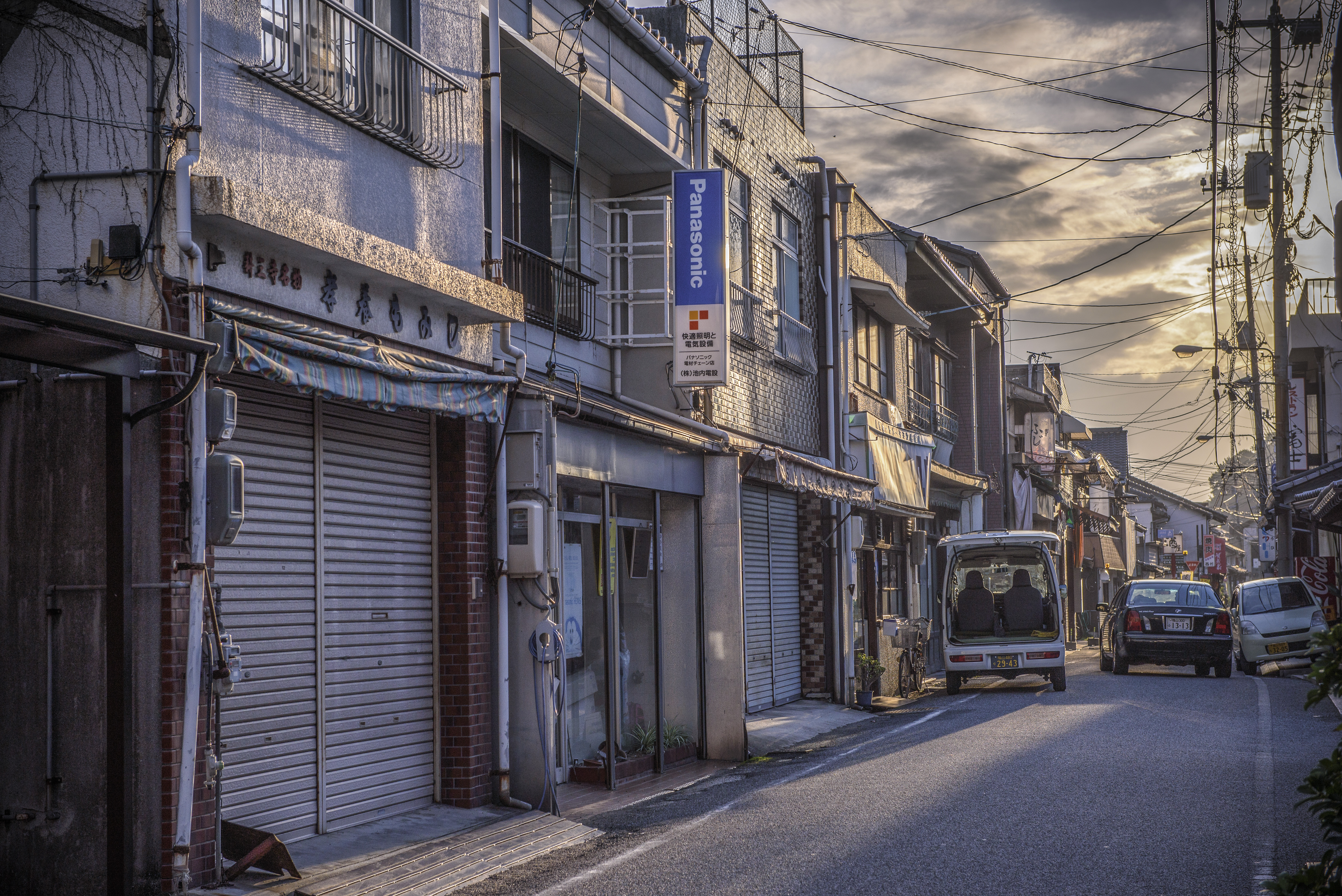 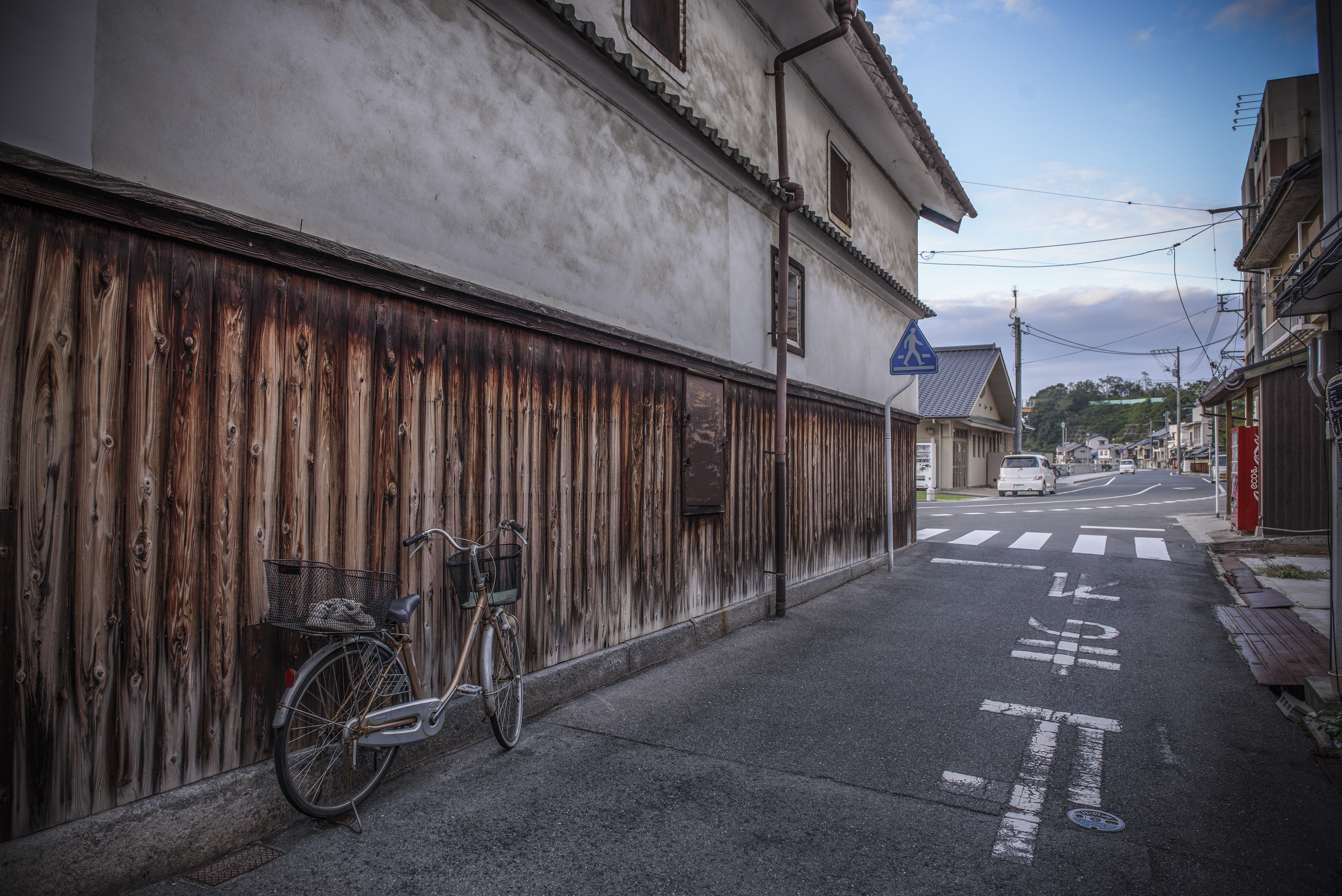 The Art of the Route

Most impressive of all are the contemporary art installations that appear every kilometer, about ten feet out in the water. Contemplative, minimalist, geometric sculptures, they are floating reminders to just pause and enjoy, at least for a moment.

A geometric, Calder-esque weather vane delicately balancing on a thin pole is Wings of the Waves by artist Sususmu Shingu, one of the 17 sculptures that circle the Ikuchijima coastline, forming the Island-Wide Art Museum. Every piece is amusing, a subtle engagement with both the viewer and the surroundings. If I consider each sculpture as simply a work of art, the Seto Inland Sea is the perfect backdrop — sculpture plus sea yielding a beautiful snapshot. But the sculptures are more than that. They are beacons of vision, forcing me to look beyond the few feet in front of me to the tranquility that encompasses all of the islands. Especially Shin Matsunaga's Clairvoyance, a pair of round, blue spectacles balancing on thick poles. I'd never be able to climb high enough to put my eyes through the spectacles, but I think I get Matsunaga's point: It's about different ways of seeing, about letting yourself see more than what is in front of you. 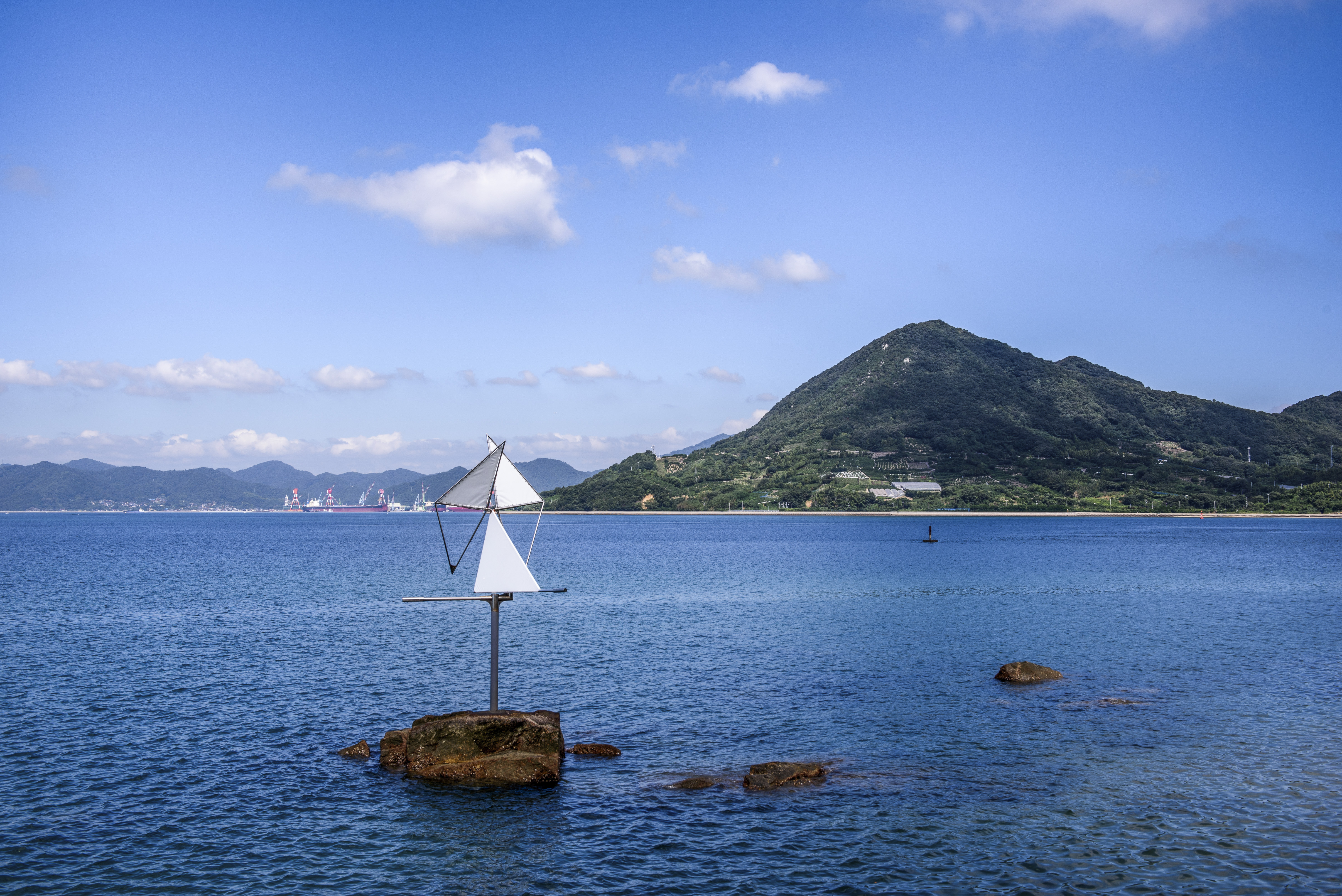 I try to keep pedaling because I am getting closer to the biggest sculpture I have ever seen, one reminiscent of Claes Oldenburg's massive Clothespin, bookending a bridge. But the sculpture will turn out to be the bridge itself: Tatara, a 2,920-foot-long, cable-stayed bridge with twin 772-foot towers (the "clothespins"). This is a destination if ever there was one.

If I can make it across into the Ehime prefecture, I keep telling myself, I will feel like I had really cycled the Shimanami Kaido, instead of just lazily pedaling down the road. At every curve I take, Tatara looms in the distance, and every time I stop to take photos, it's there — an Instagram-ready albatross reminding me that I have to keep to a rhythm if I ever want to reach my destination.

A Meditation and a Race

Darius arrives at Tatara what seems like hours before me. For him, this cyclist expressway is a personal speed test and leaving me in the dust is of no consequence. By the time I reach the base of Tatara, actually only 45 minutes or so later, he has criss-crossed the bridge countless times. I slowly climb Tatara's cloverleaf approach ramp, cursing myself for having refused to wear comfortable workout pants. I have just about decided to hate the ride when Darius shouts something about an acoustic anomaly.

The base of each Tatara tower is one of those magical places where sound wondrously carries. The bridge authority has left a pair of wooden batons at each one, for people to clap and bang together to their heart's delight. And bang I do, releasing all that anger for the tiny, uncomfortable saddle and for Darius, who hadn't, in fact, tricked me into this cycling adventure. I'd known what I had been getting into, that this would be an expressway haul and no mere country meander. 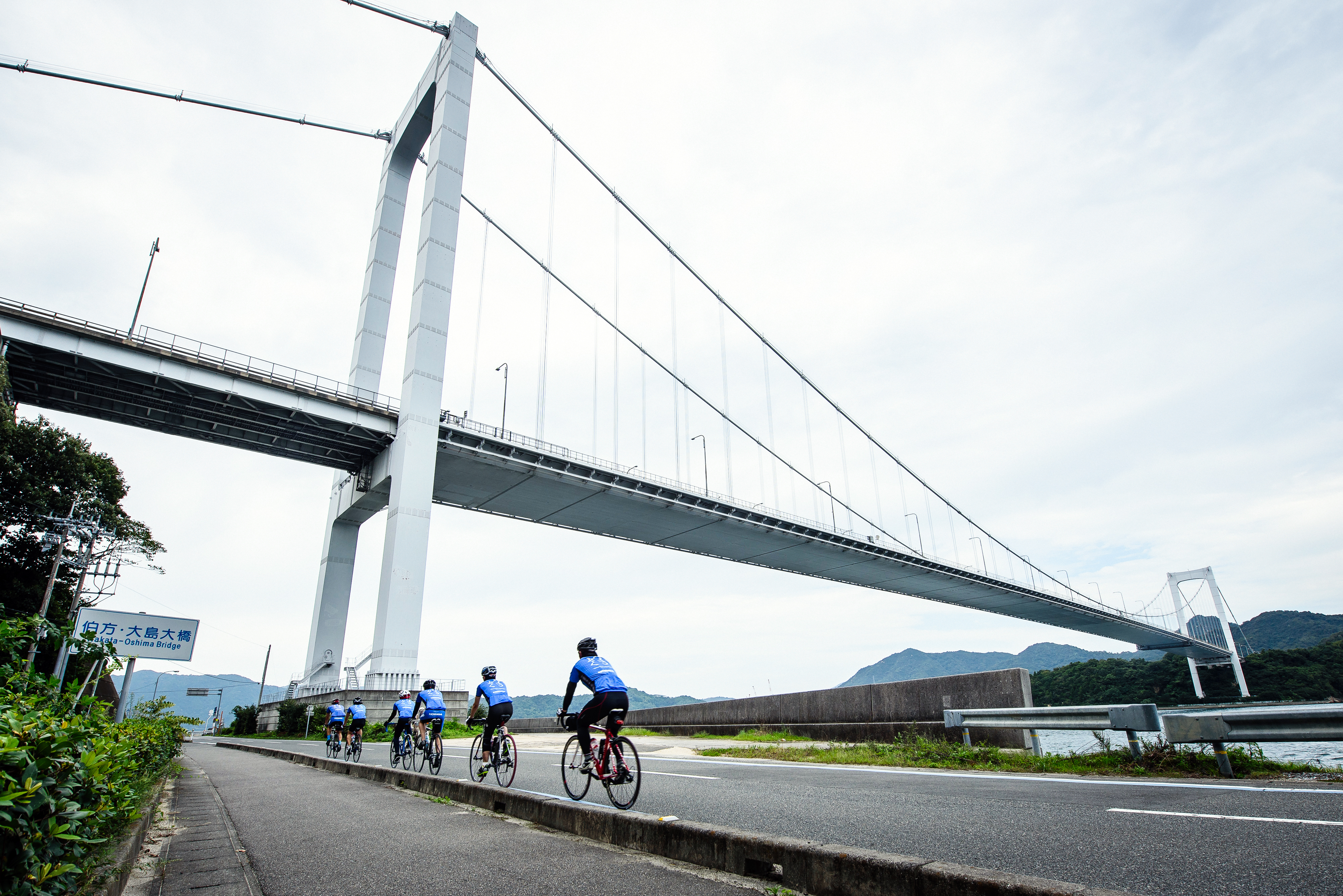 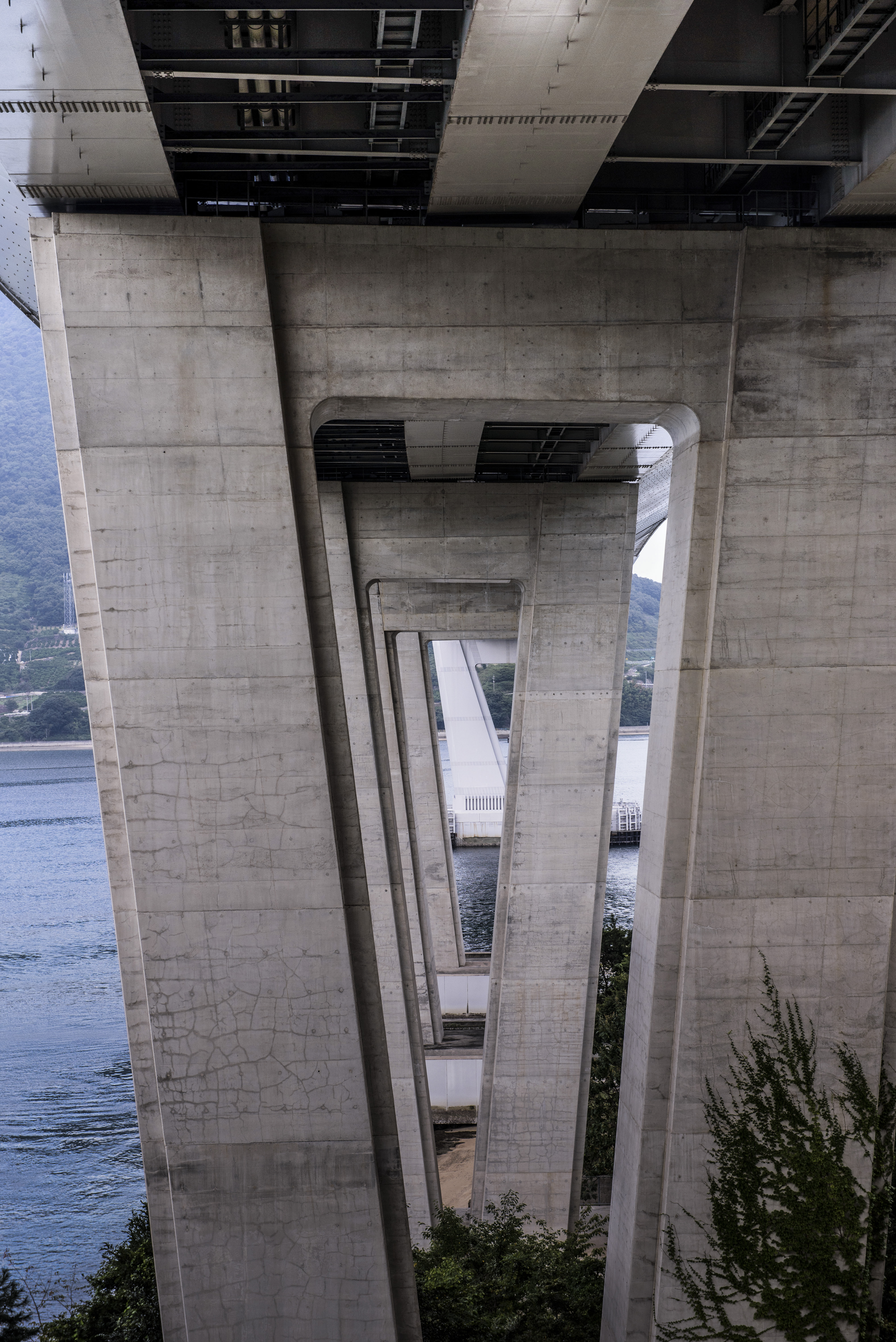 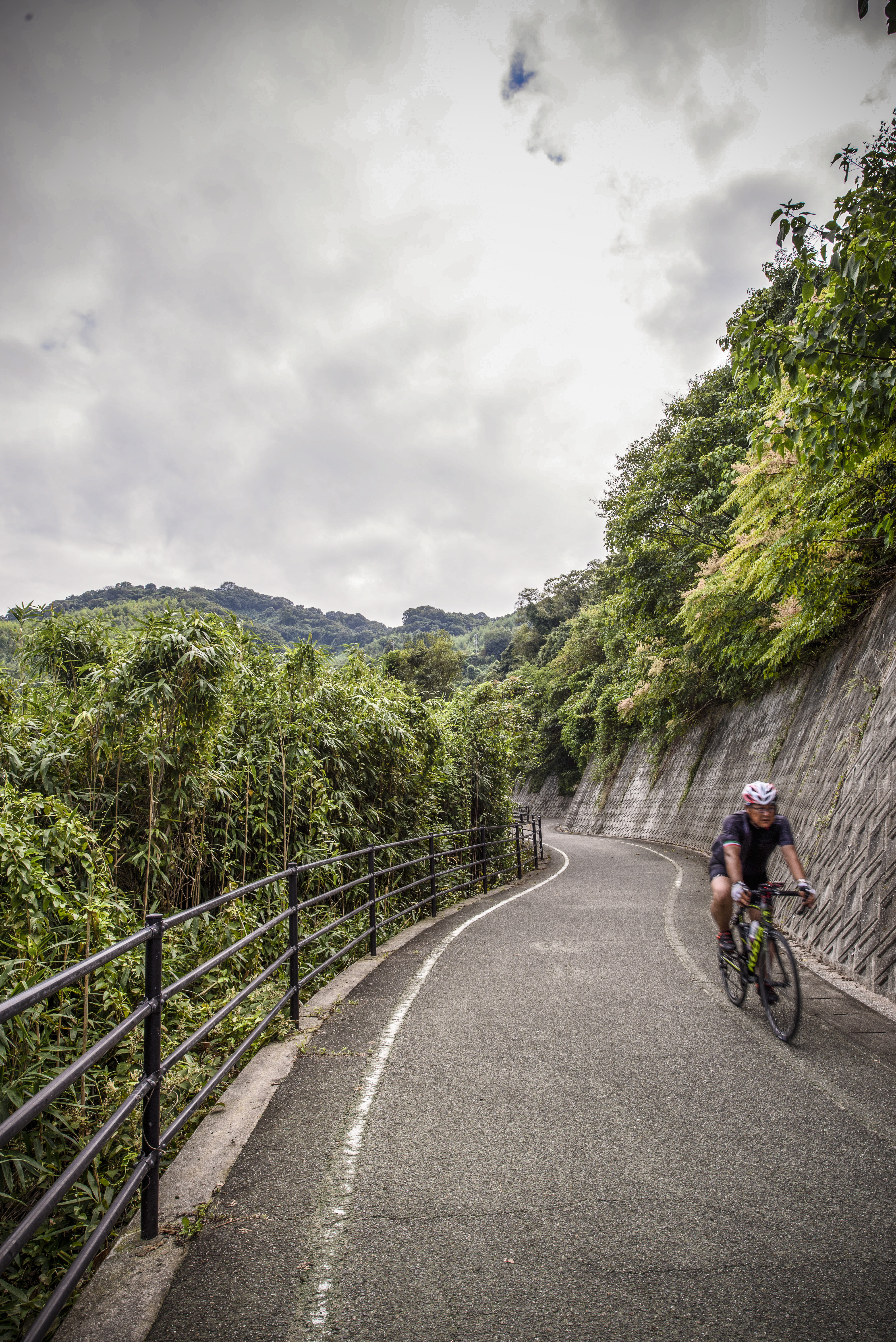 Kurushima-Kaikyō, underneath Tatara, and along the route. Photos by Wu Sheng Wang

I zip across the bridge to the second tower for more baton-banging, and then I finally put my kickstand down in Imabari. I've done it. I've cycled the Shimanami Kaido. OK, I have at least cycled a section of it. But it's a good one!

Soon it's time to head back to Onomichi. I race Darius — with sarcasm and exaggeration — across the bridge and back down the cloverleaf ramp, kicking my legs out, without white-knuckling the breaks. And just then, I get it. I am a cyclist, even if only for a little bit. If I had wanted us to feel like a side-by-side team when we set off, I now see that my definition of "team" was restricted and short sighted. Cycling together but separately sometimes means riding solo and watching your teammate live his dream.

I also understand why cyclists from all over converge to race this simple 70-kilometer stretch: It is both a meditation and a race. It is an expression of the duality of Japan — at once beautiful, streamlined, and fast, and yet also traditional, charming, and slow.

As we pedal back toward Setoda, Darius finally gets my version of a bicycle ride. We stop at a random graffiti- and collage-decorated school bus on the side of the road, take photos of the floating sculptures, visit a shrine, and stop for a bite at a nondescript okonomiyaki joint, where we languidly pile together the Japanese pancake, a delicious process of layering batter, noodles, chicken liver, shrimp, pork, bean sprouts, and everything else in front of us.

I leave him to the rest of the bridges and kilometers of the Shimanami Kaidō while I enjoy soft serve Setouchi orange ice cream, snap photos, and wait for the ferry back to Onomichi. Would I do it again? Yes, but next time I am bringing a city cruiser.