This Is the Quietest Place in the World

Hiroshima Peace Memorial Park is but one beautiful shrine in a devastated place.

Tokyo's glittery skyscrapers disappear quickly as we head westward, our views transforming into a beautiful and richly-colored blur of small homes, backyards, farms, and towns. I know it's just another train ride, but I can't help but feel excited. We're on a Japanese bullet train, with its magnetic velocity and incredibly efficient one-minute carriage clean-ups. In five hours, we'll arrive in Hiroshima, but in the meantime, we're treated to a drive-by view of Mount Fuji, its sharp snowcap reigning over the flatlands.

This trip is a last-minute decision my husband, Darius, and I made after another last-minute decision, to extend a Tokyo weekend into a kid-free week in the southern Hiroshima prefecture. We decide we can't leave Japan without seeing the neighboring UNESCO World Heritage Sites of the memorial at Hiroshima and Itsukushima, the country's most beautiful shrine, on Miyajima island.

The Genbaku Dōmu stands as a stark and powerful request for peace. Photo by Erica Firpo

Our friend Hiro meets us at the station, and rain pours down as we drive around his hometown. The rain enhances the rich gray tones that make a rebuilt Hiroshima stand out against the sky. The architecture and urban design itch my brain, reminding me of my hometowns — Century City in Los Angeles, where I grew up, for the high rises, and Rome, where I live now, for the urban parks and fleets of scooters.

The rain is but a drizzle when we arrive at Hiroshima Peace Memorial Park, the quietest outdoor place I have ever visited. Dedicated to the victims of the world's first atomic bombing, the complex designed by architect Kenzō Tange is a long rectangle, a somber, almost barren concrete park filled with smaller sculptural memorials to the victims. The Children's Peace Monument, a delicate and tall concrete tripod with a bronze crane wind chime at the center, brings us to tears as we ring its bell. 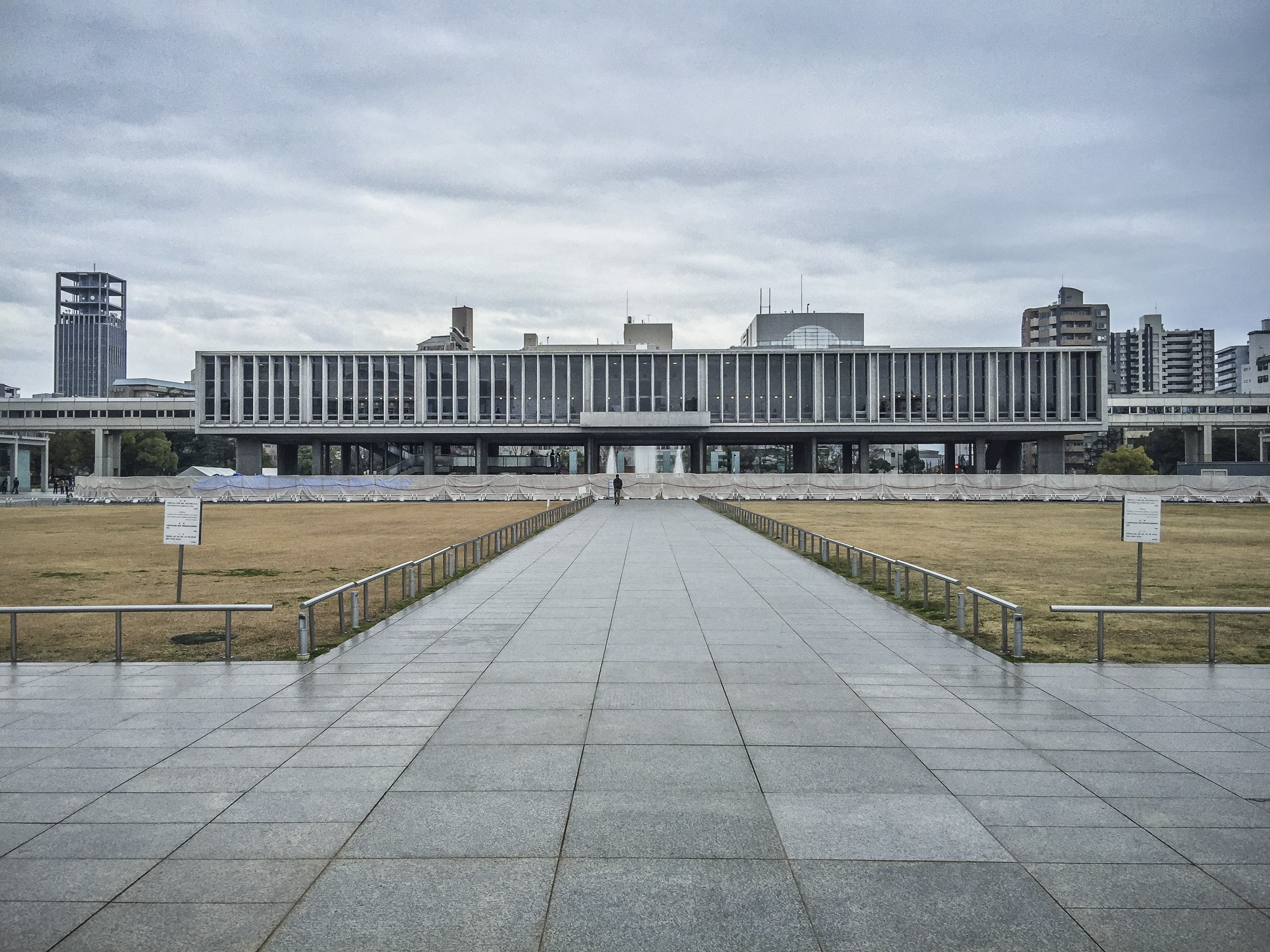 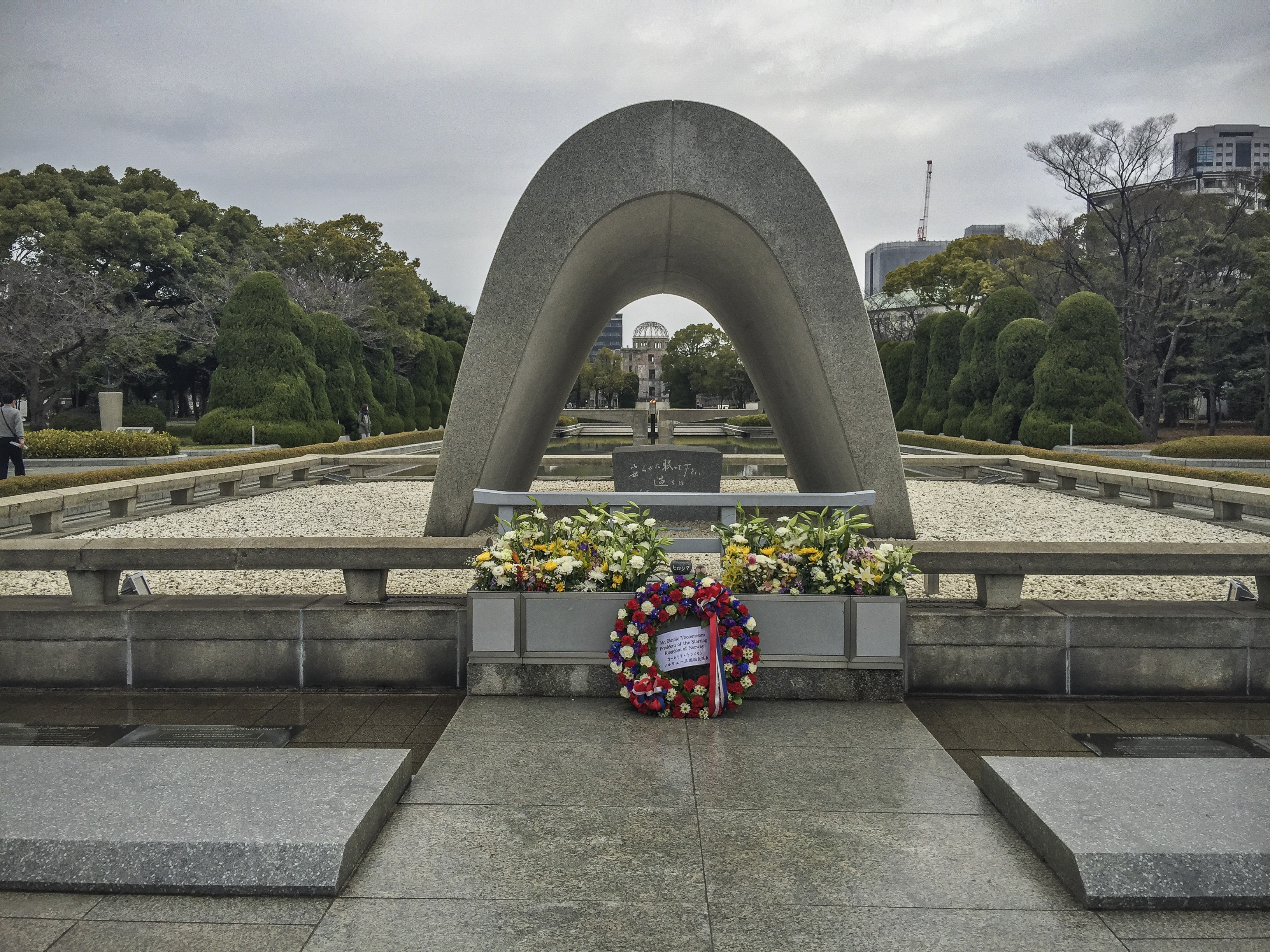 The Hiroshima Peace Memorial Museum, another monument in the complex. Photos by Darius Arya

In front of us is an open space, a panoramic view across the river to the Genbaku Dōmu of Hiroshima Prefectural Industrial Promotion Hall — ground zero for Little Boy, the bomb dropped on August 6, 1945. We cross the bridge and stand in front of this skeleton of a building. Time is a pregnant pause here, and everything feels frozen, but for the passing of a tram or car in the background. It is quiet, and, yes, unfathomably sad. But at the same time, there is a strength and dignity that envelops us, a palpable resilience emanating from the hibakujumoku, the "survivor trees" — weeping willows, gingkos, junipers, and more — that survived the bomb and continue to grow.

And there is more to see: A short ferry ride across the sea from the site of history's most horrific act of violence lies a small island that's home to Japan's most beautiful shrine.

Hiro waves a handful of tickets at us and tells us we have just enough time to catch the ferry to Itsukushima ("shrine island" in Japanese; its official name is Miyajima). Hiroshima disappears in the fog as our ferry heads into the bay. After 45 minutes, we see a traditional triple-pillared gate — gorgeous, dramatic, orange — floating in front of an island. My first thought is that the Great Torii gate looks like an emoji. Hiro is more eloquent, telling us that a torii signifies the barrier between the sacred and the profane world.

Built in 1875, the Great Torii is the entrance gate and the symbol of Itsukushima, the 16th-century Shinto shrine complex. The Torii stands 55 feet high on six pillars about 600 feet from the shoreline, and it appears to float magically on the water at high tide and stand steadfastly fixed to the sand during low tide. It is considered one of the three most beautiful panoramic views in Japan, its vibrant orange structure contrasting the evergreen island and rich blue sea. My heart swells at first sight.

Miyajima's ferry dock is a typical small port, with ticket counter, snack bar, souvenir stands, and signs directing you to the Omotesando arcade, the bustling main street lined with shops selling wooden, hand-carved rice paddles, cookies, and oysters — served either grilled, on the half shell, in a sandwich, or on a stick. (The options don't really matter; they are Miyajima oysters, and I'm going to eat them all.) It's touristy, yes, and part of me expects to see animatronic cherubs singing "It's a Small World." But Omotesando is a peaceful walk with none of the "hey-wanna-buy-this" that I'm used to in Rome. We're all smiles as we window shop. Midway down the road is a 24-foot wooden rice paddle, the world's largest rice spoon and Miyajima's second most popular selfie spot. Legend has it that a local monk made the first rice paddle 300 years ago after dreaming that the deity Benzaiten showed him a traditional Japanese lute, which he interpreted as a magical spoon. Ever since, the wooden paddle has been the symbol of the island. 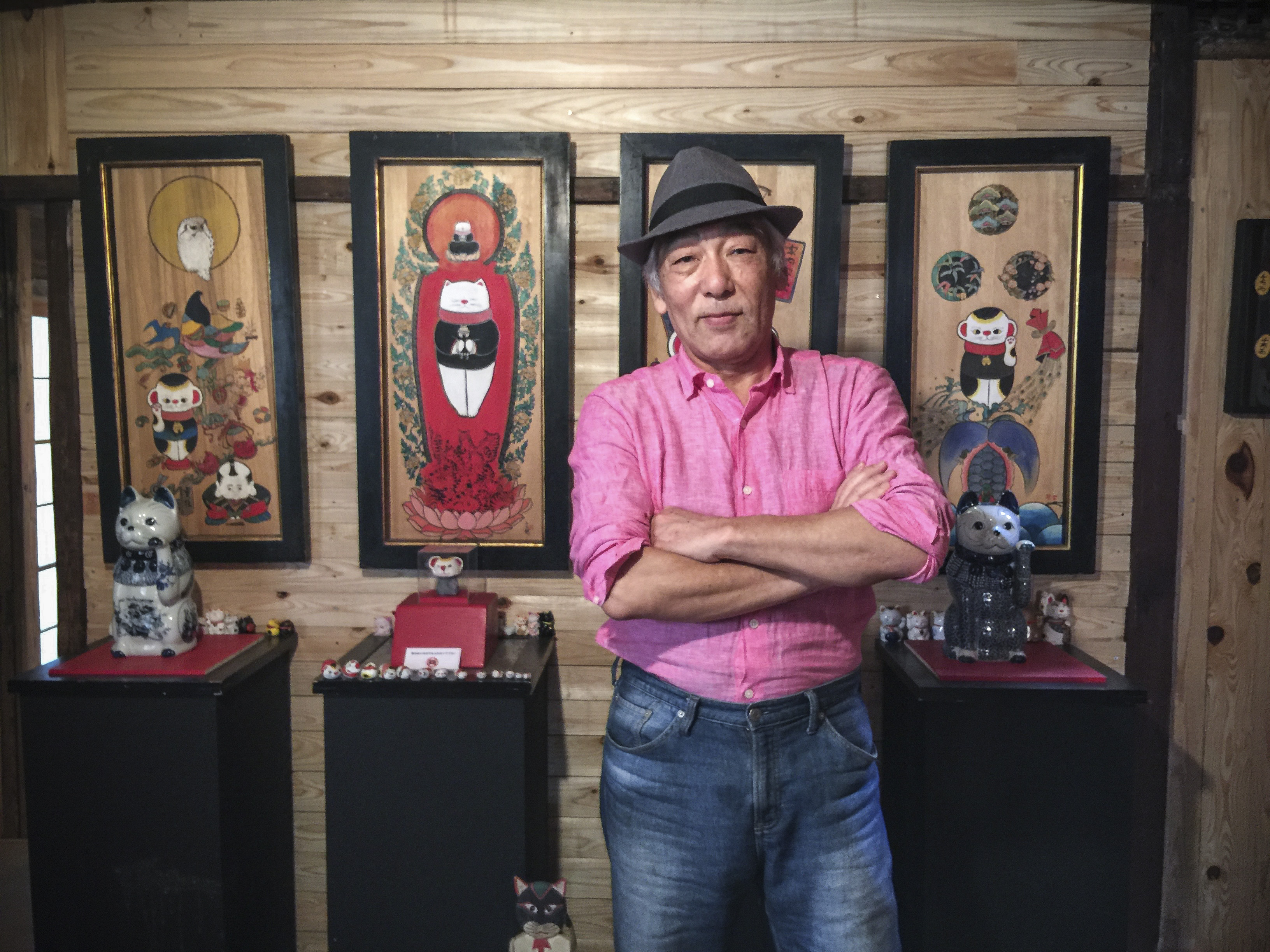 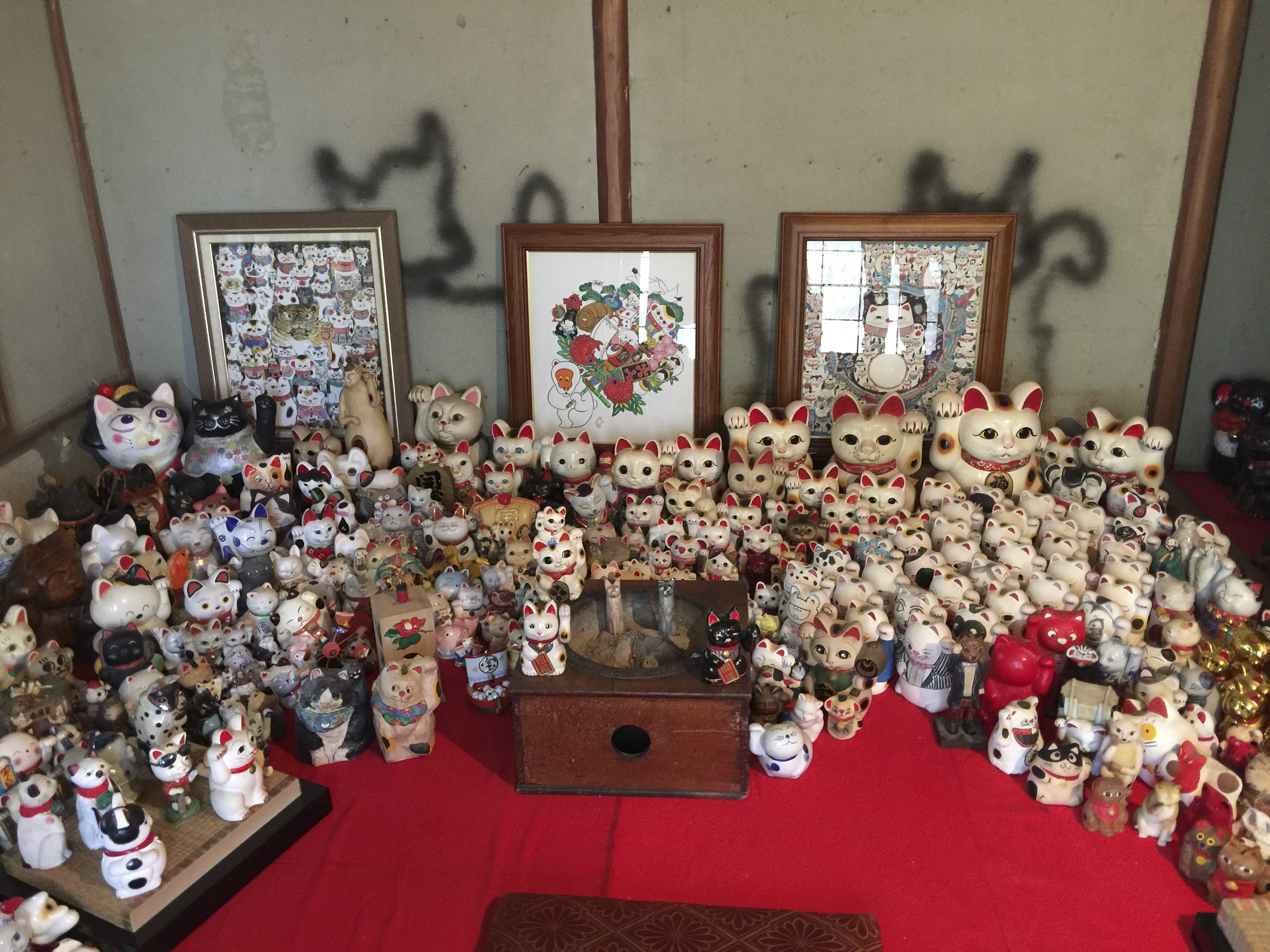 In and around Miyajima. Photos by Erica Firpo

The Omotesando arcade ends abruptly, and we are standing in front of two large stone lions and a simple concrete gate. It's quieter here, pebbles crunching underfoot as we head down a tree- and lantern-lined road to Itsukushima. As we walk, miniature deer try to pick our pockets. We let them: The deer have lived on the island for centuries and are considered sacred. The road begins to curve, but we stop. Directly in front of us is the Great Torii in profile, and we can walk across the sand to stand next to it.

Miyajima has an otherworldly beauty — a fairy tale island, hidden by mist. Although it is 20 square miles, it feels small and intimate. Maybe it's the rain, or the deer, or the sugary smell that I can't put my finger on but is definitely in the air, but the whole of Miyajima has an ethereal aura.

Hiro tells us it's time to run back to the dock. I tell him I must eat that bewitching melted sugar smell. He leads me to a small bar with an open kitchen where a man is pouring batter into iron molds. I sample his fare: momiji manju, maple-leaf shaped cookies made of sweet red bean paste, flour, and honey. Aside from being delicious, the sweets are Miyajima's best culinary export, created 100 years ago for a ryokan owner who wanted an edible souvenir of her island. Warm, soft, and sugary, they are my new favorite treat, and I find myself murmuring momiji manju, in my head as if it was my mantra. It will be.

On the ferry back, I feel the harmony of Hiroshima and Miyajima, the concrete city and the otherworldly island. Hiroshima is a heartbeat of straight lines and a melody of grays; Miyajima is a naturalist rhythm of greens and stones and water and forest. They are complementary colors of the sacred and the profane, of survival and history.

The Bridges of Hiroshima Prefecture

The Lived-in Jeans of the Onomichi Denim Project