By Mike Magers Updated Oct 31, 2016, 12:52pm EDT
The hands of Noriyuki, Kitai, and Kenji Yoshida, toolmakers and blacksmiths in the town of Shimabara, on the southern island of Kyushu.

It is often said that in Japan, objects are born, not made. I came to understand this sentiment while photographing knife makers outside of Osaka for a book delving deep into the intersection of Japanese food and culture in Japan called Rice, Noodle, Fish. I was told I'd be visiting a factory where some of the finest chef's knives in the world were forged. Instead of the large-scale operation I envisioned, I found myself in a small garage, barely large enough for my translator and camera gear.

I stood transfixed, watching a blacksmith named Yoshikazu Ikeda pound and fold 1000-degree carbon steel into blades wielded by the likes of culinary masters far and wide. His approach was virtually unchanged from that of a century ago (save for the introduction of electricity to power his press), and yet in these humble surroundings he produced an exquisite level of artisanship. This, I came to understand, is part of what it means to be a Shokunin.

I first came across the term Shokunin italicized over and over again in the subtitles of the film Jiro Dreams of Sushi. And Jiro, like so many other chefs across Japan, exemplifies many Shokunin attributes -— a single-minded focus on process, an obsessive but also joyful approach to work, and, with skills developed over a lifetime of repetition, a level of quality and artistry that can elevate the humble to the sublime. How else can something as seemingly simple as raw fish and pressed rice much less a teacup, kimono, or Samurai sword inspire such awe? Perhaps it is because many of us, especially in the west, are increasingly forced to choose between speed and quality as we assess the items with which we are surrounded. Sadly, this phenomenon is not limited to cultures outside of Japan — given it takes an average of 10 years to simply learn technique, and a lifetime to transfer one's spirit into one's hands, fewer and fewer young Japanese have the patience to follow in the footsteps of the old masters. Combined with the inevitable demographics of an aging society, many of these crafts are at risk of extinction. 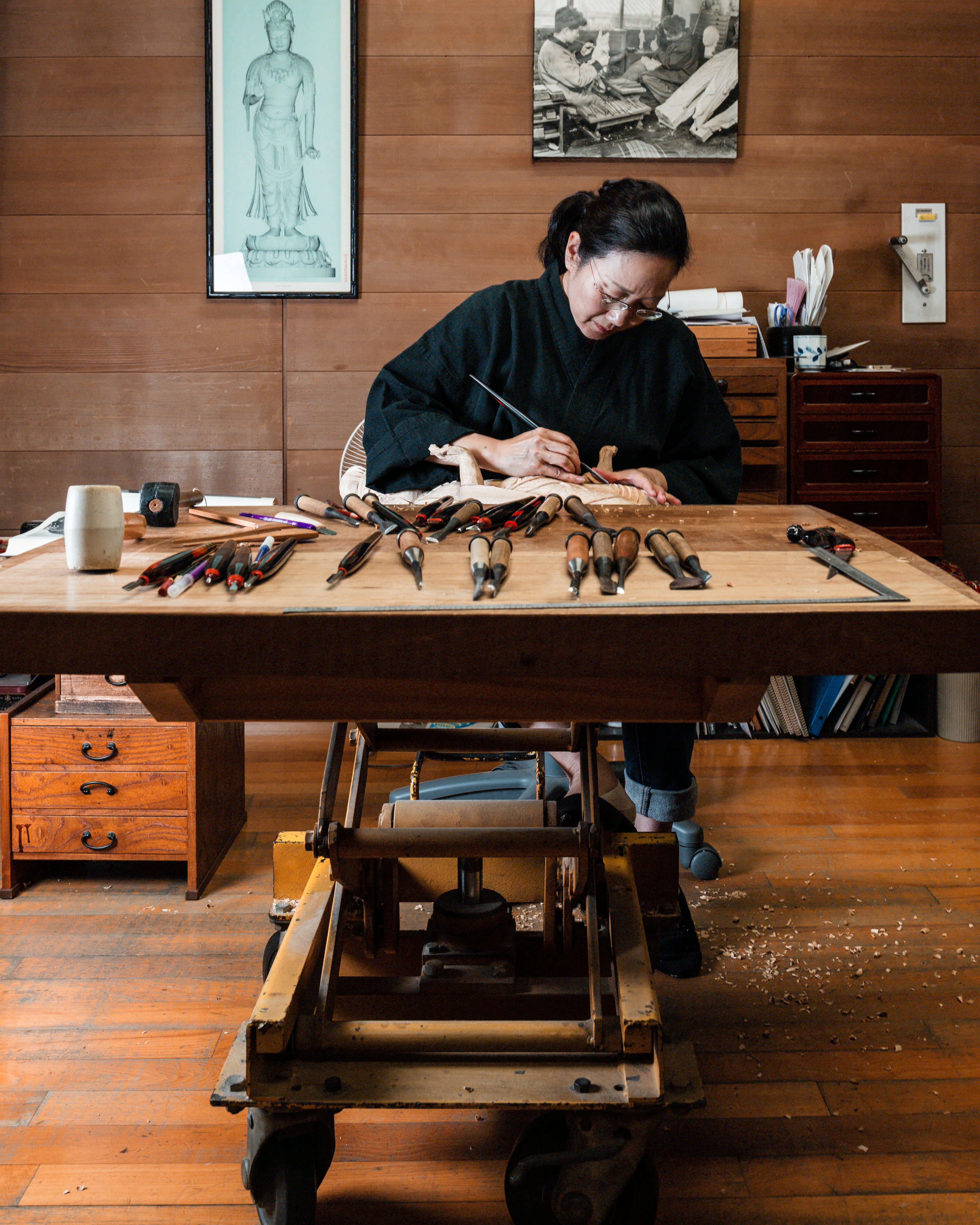 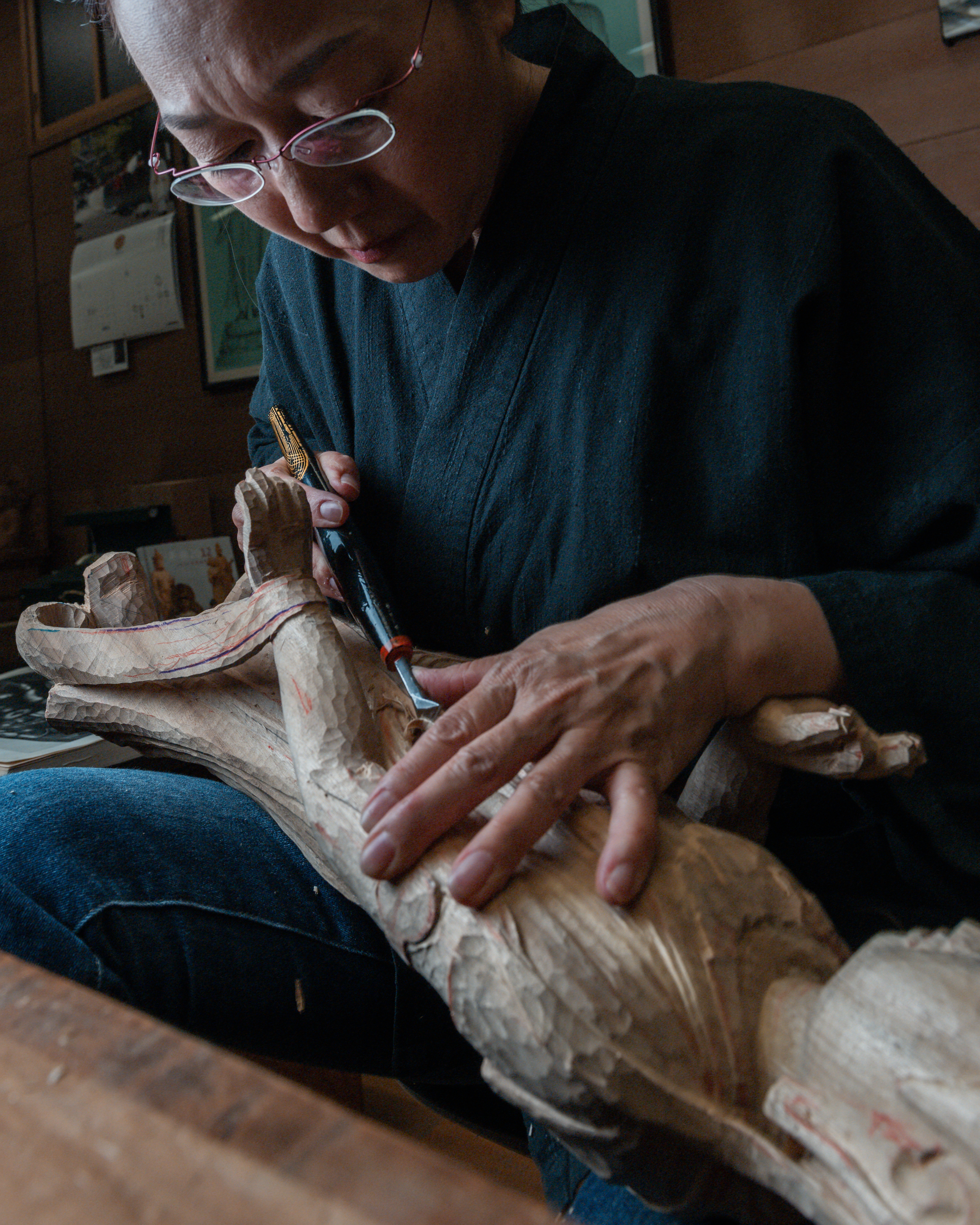 My first experience with knife-making inspired my own form of obsession and lead deep into the rabbit hole of craftsmanship in Japan — since 2013, I have documented Shokunin in nearly 35 workshops around the country both to bring attention to their work as well as to serve as a form of cultural preservation. These are men and women who have dedicated their lives to the pursuit not of perfection (as this would be unattainable) but of refinement — and this they have honed to its sharpest edge. As society is ever more on-demand and obsessed with instant gratification, these craftspeople continually create things with a heartbeat — the kind of products that are handed down from generation to generation, infused with both form and function.

Kayu Matsuhisa, a Busshi Sculptor (and one of a small group of female Shokunin) in Kyoto, carves a statue of the Buddha for use in temples around Japan. Matsuhisa views her work with a deep respect for the spirituality of her subject, talking to the wood as she carves, asking it to yield so that the Buddha's joy can be shared with world. 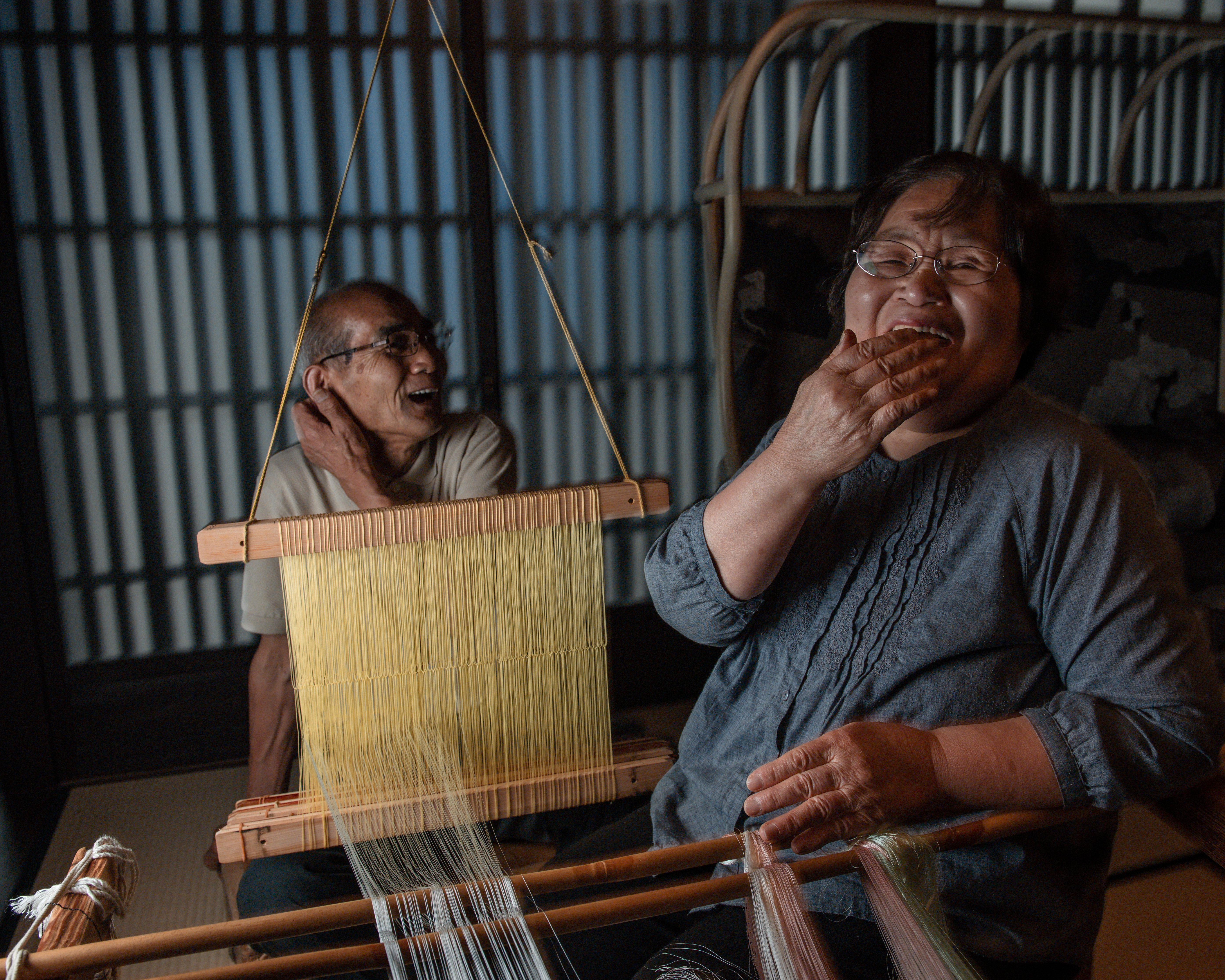 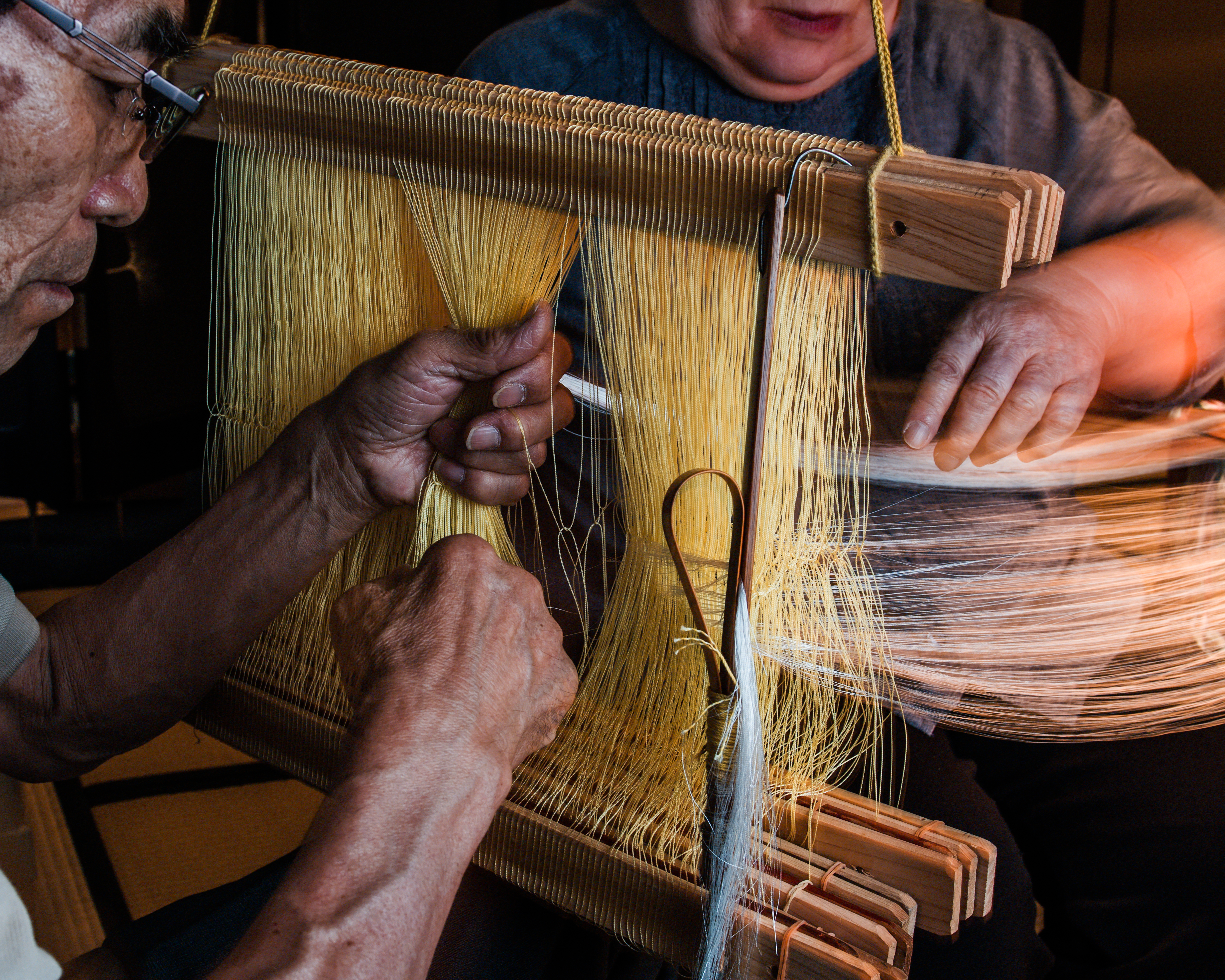 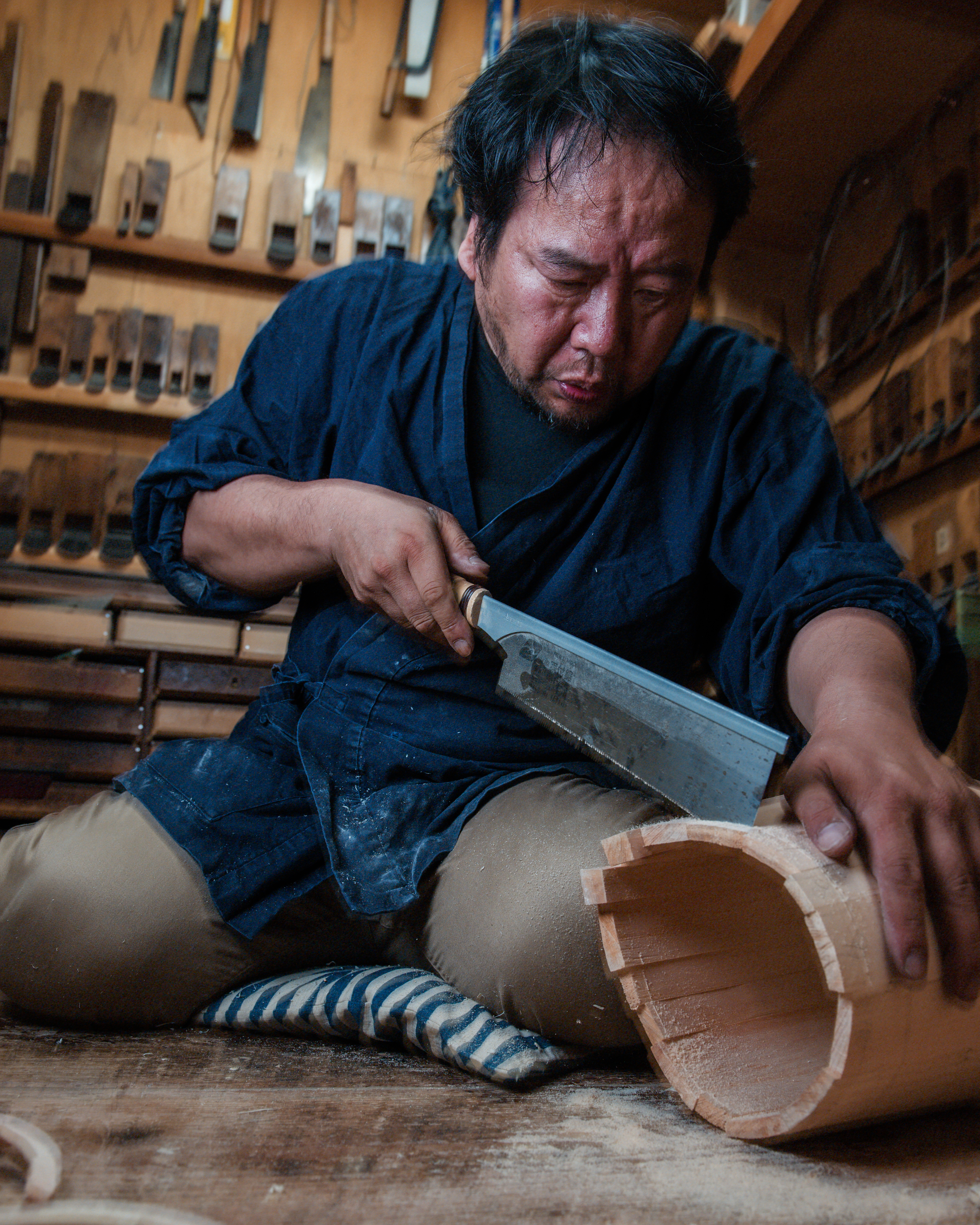 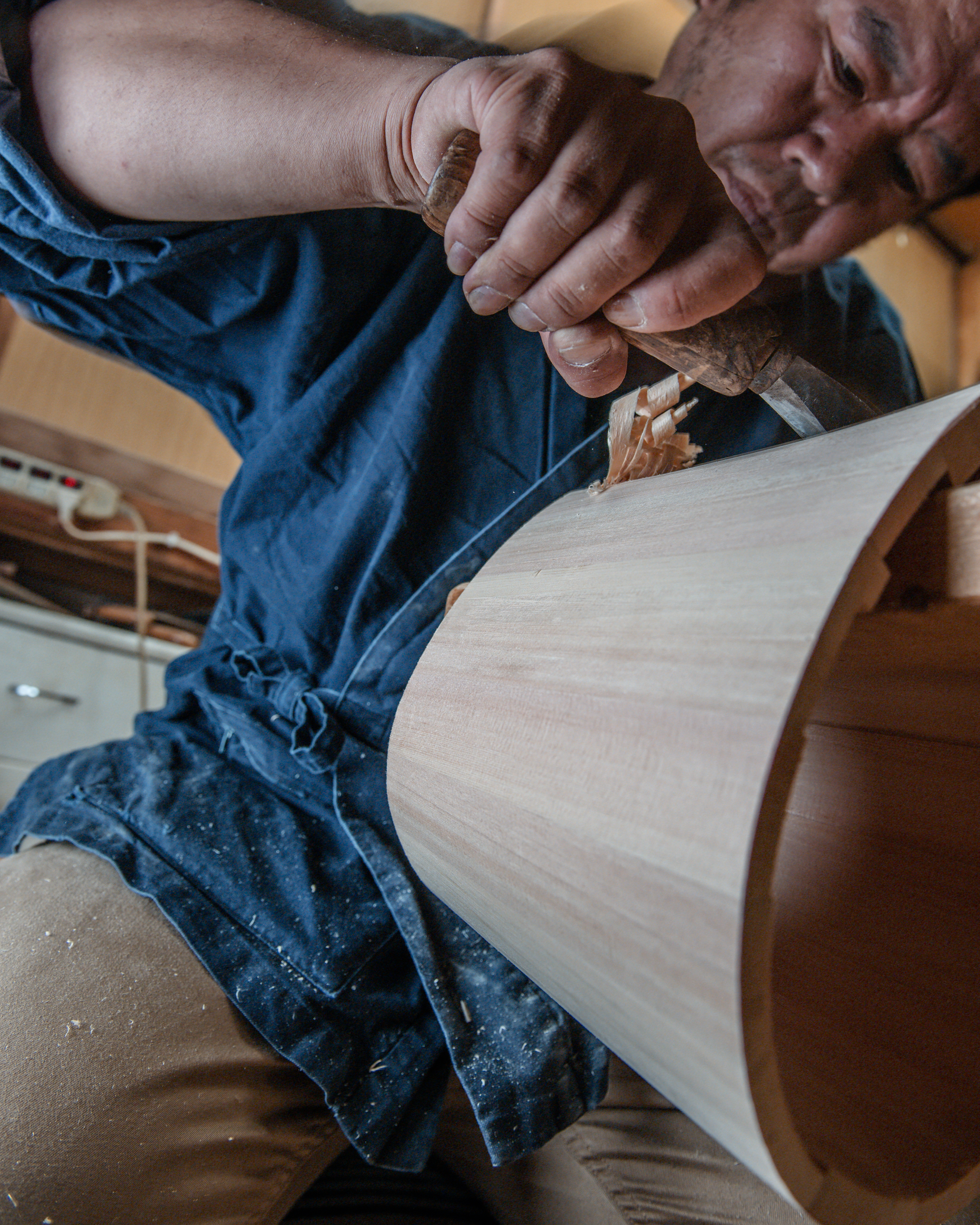 As with many crafts in Japan, there is a chain of Shokunin involved in the process by which kimono cloth is woven. Yuji and Masako Miyabi, married more than 60 years, met as apprentices and are loom setters — they untangle and prepare the delicate strands of thread for use on the loom — a two-person job which requires intense concentration and mathematical precision (and, in this case, near constant good-natured bickering).

Born into a legendary family of coopers and bucket-makers (ki-oke), Nakagawa carries on the legacy of his father, Living National Treasure Kiyotsugu Nakagawa, by melding art with craft and form with function.  His work is exhibited internationally and brings a modern sensibility to a 700 year old word-working tradition of objects central to Japanese life — from the all-important ritual of bathing to storing rice and miso. 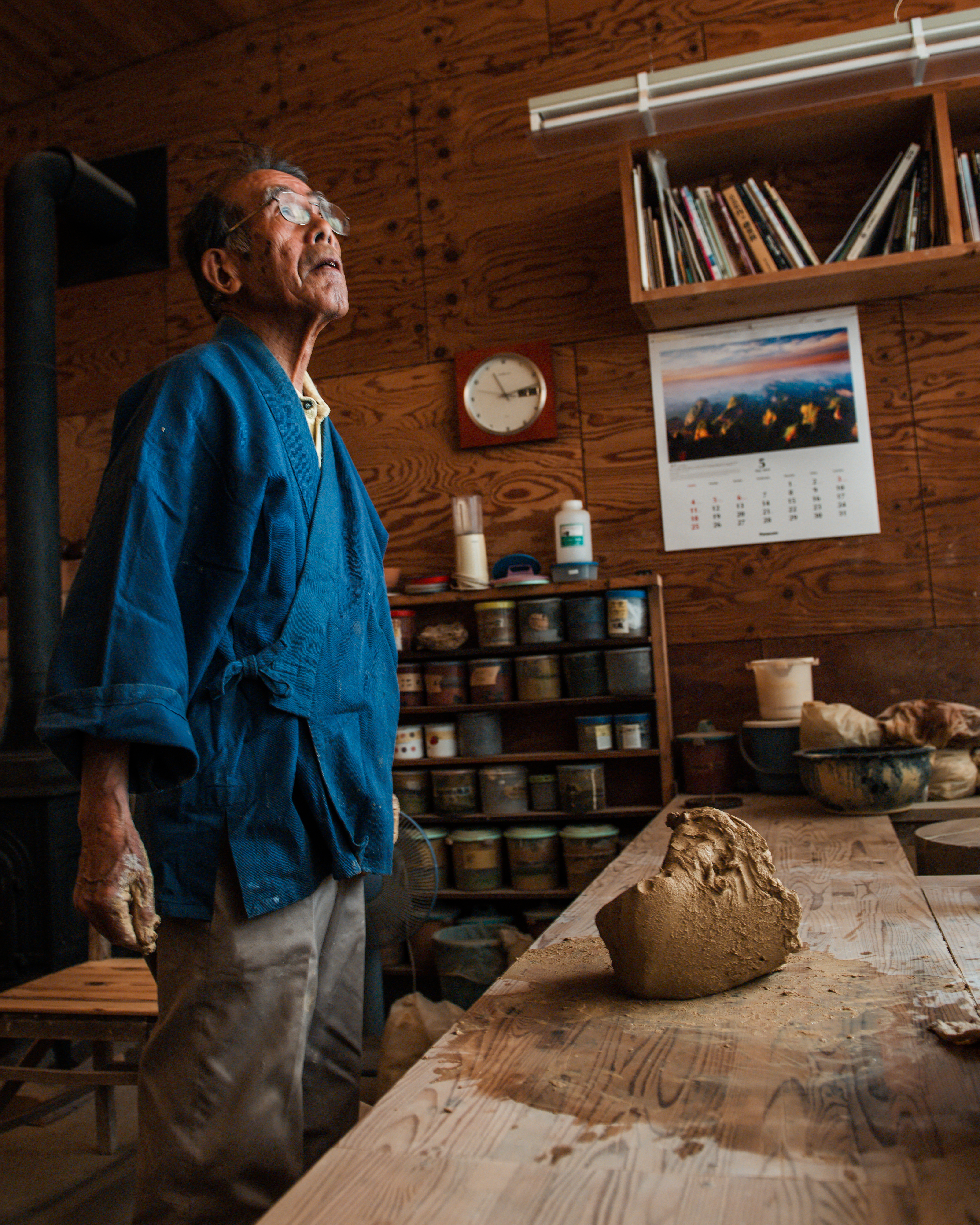 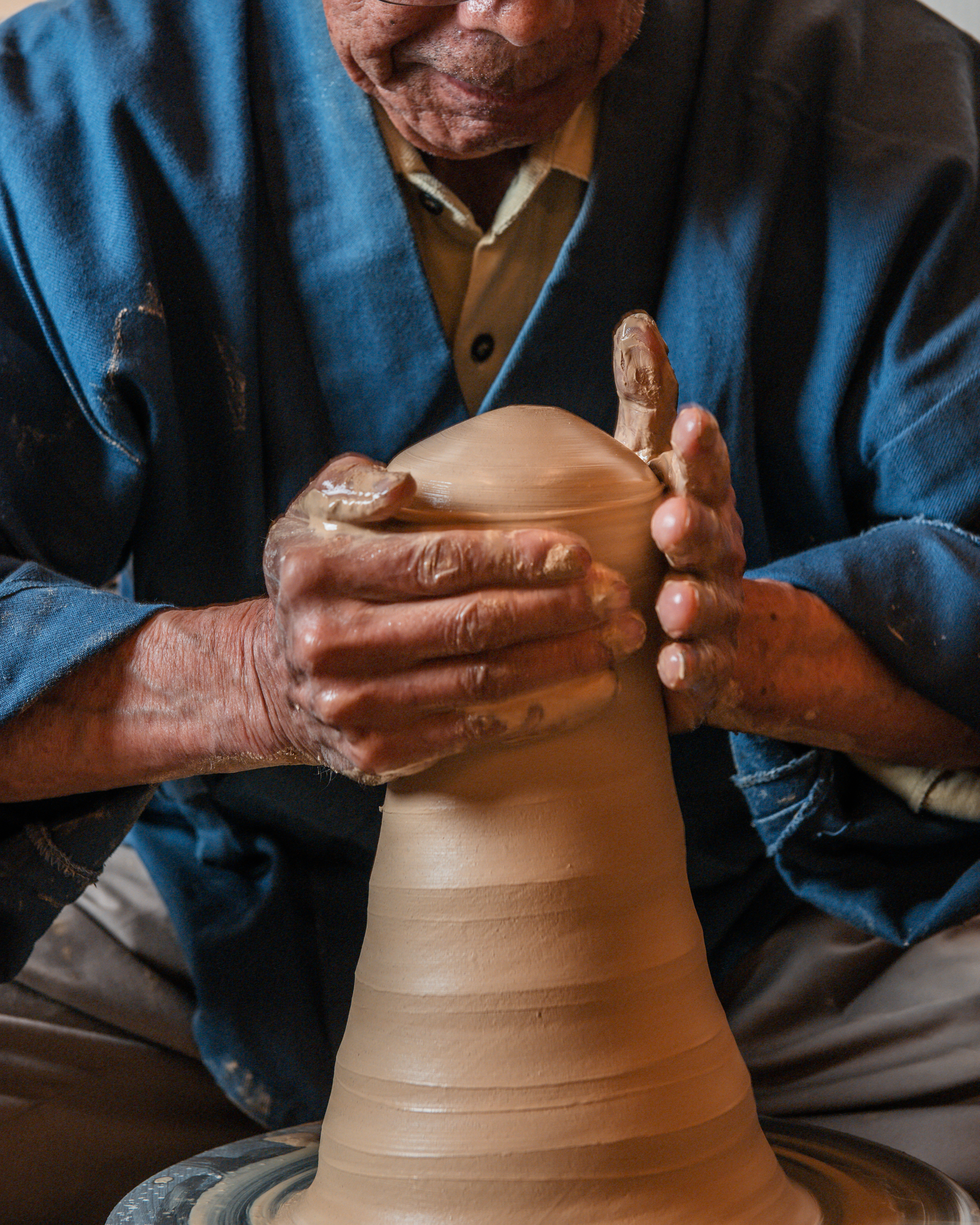 Kyubei Watari passed away shortly after I photographed him. The pain at throwing and manipulating the clay is evident on his face, yet as he worked he was transformed. Watari spent the better part of 50 years honing his Agano-style of ceramics in the small town of Nogata, on the southern island of Kyushu. His pottery is intensely organic, with stone, ash, and iron used to develop different glazes and contrasts. His legacy lives on in his son, Hitoshi, who represents the 11th generation of the family’s ceramic tradition. 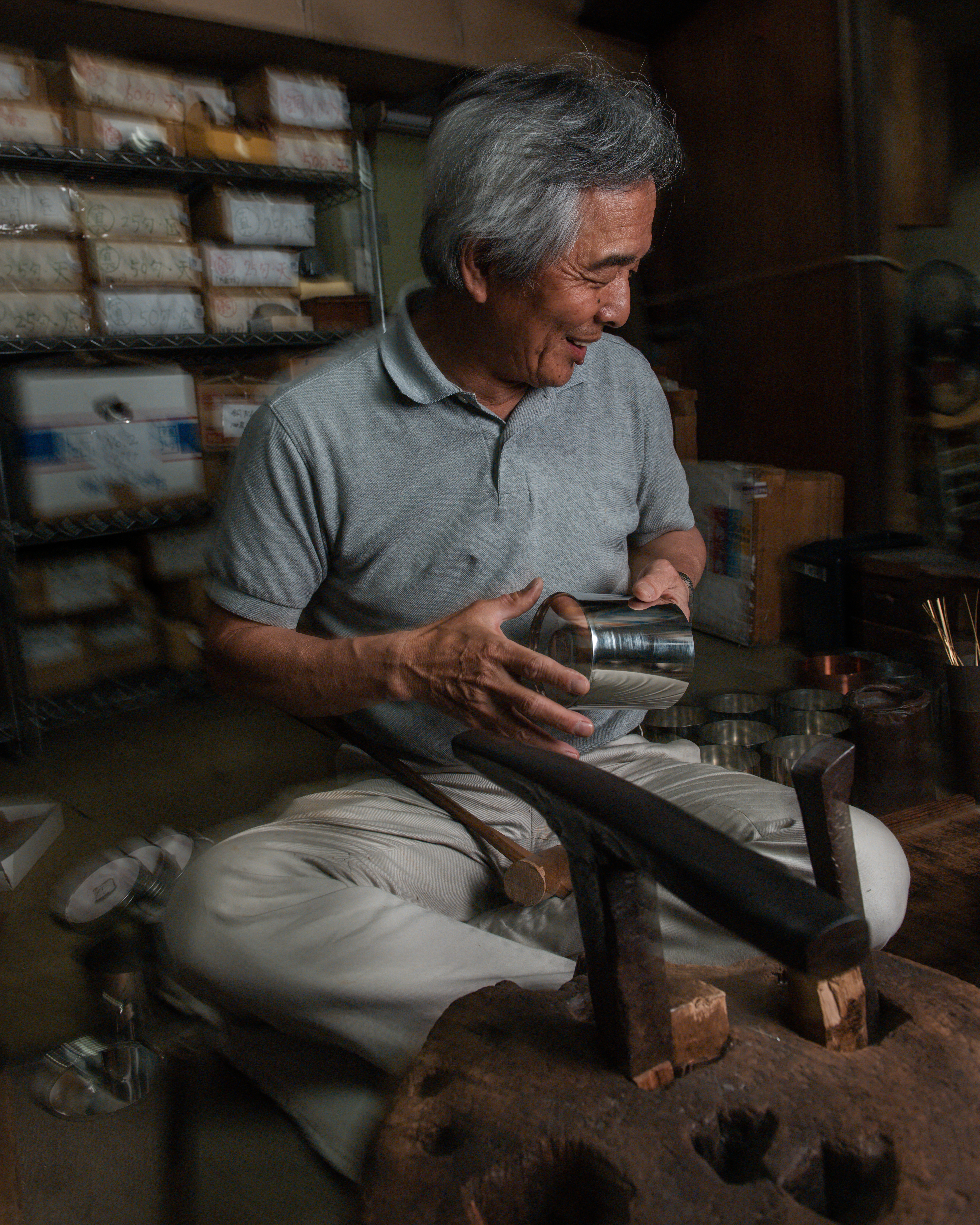 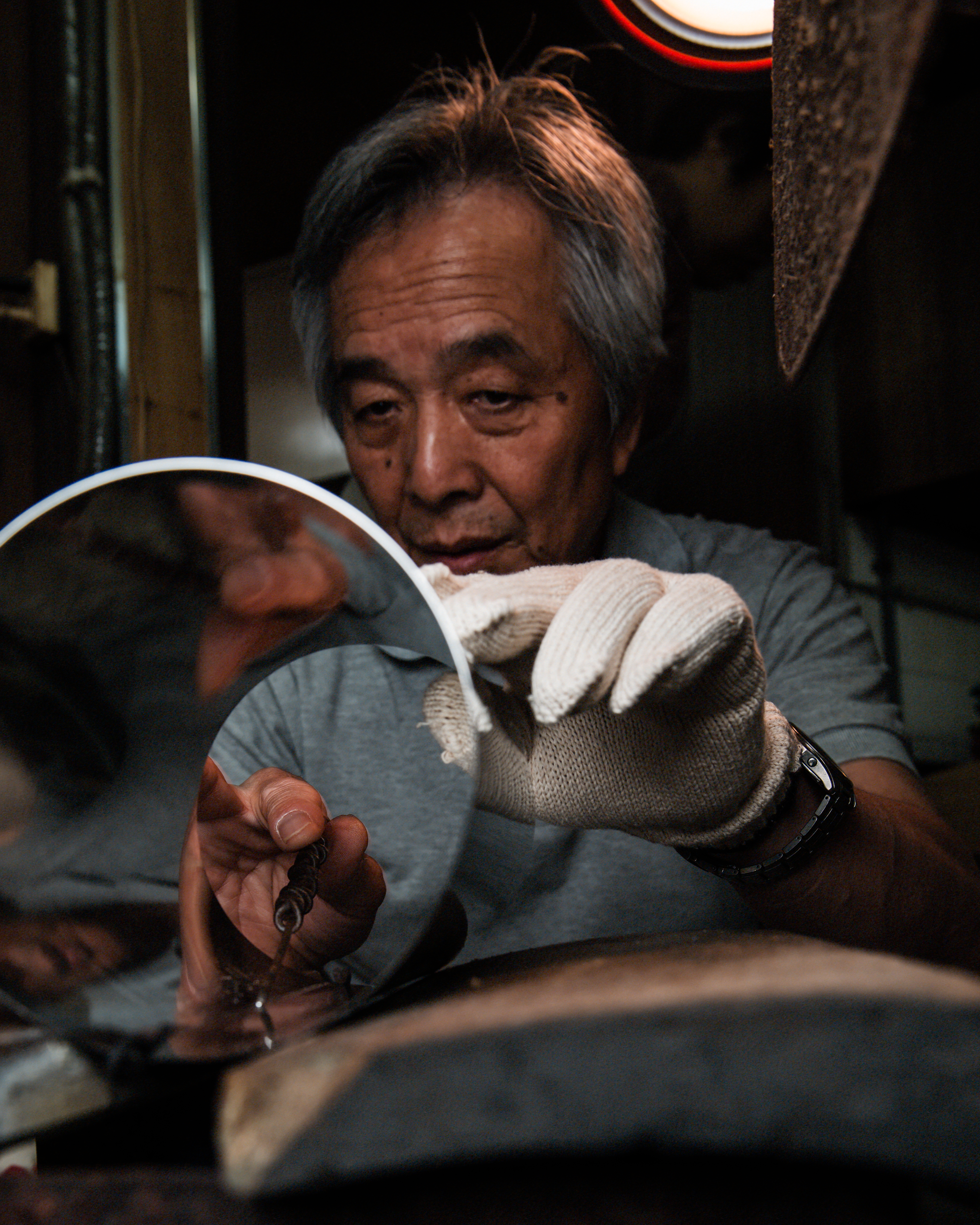 Yagi is the jovial 5th generation scion of Kyoto’s now world-renowned tea caddy producer, Kakaido, which was founded in 1875.  Manufactured in a process that has changed little in the past 130 years, Yagi believes machines are not able to achieve the level of precision attained by the experienced human hand.  His son Takahiro continues to push boundaries and develop products for an ever more international audience.

The Hidden Osaka Restaurant Where Timing Is Everything